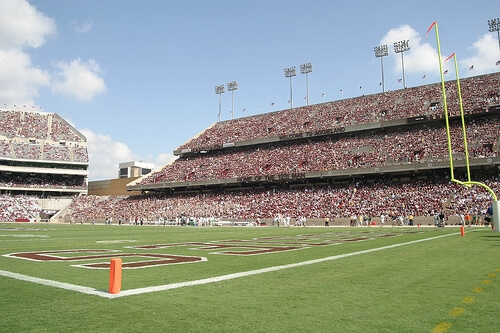 Texas A&M, the SEC and the College Football Paradigm Shift

Rumors have fluttered around over Texas A&M changing conferences into the SEC since last summer and they haven’t died down. These rumors have been red hot ever since the University of Texas announced the creation of the Longhorn Network. Going into this weekend A&M felt it was time to get out of the shadow of their colossal neighbor.

However, no matter how bad the Aggies wanted in, it was no guarantee. SEC presidents met today to discuss A&M’s admission and basically said, “We’ll think about it.” So it’s still a possibility. If A&M were to move, it would cause a paradigm shift; the SEC making a move to expand it’s power and bank account. But A&M moving or even attempting to move without any repercussions is impossible. Their attempt will already make for an awkward Big 12 season. And it isn’t like the SEC is suffering without the Texas team, they still remain the dominant conference.

The ultimate question is would A&M be a good fit? Despite the outcome of the SEC’s meeting, the Texas A&M board of regents called for a special meeting on Monday and to discuss conference alignment. Additionally, House Committee on Higher Education will meet  Tuesday to address the situation involving the state’s two most high profile schools.

With all the hoopla stirred up, message boards and social media sites blew up with excitement amongst A&M fans. Even after the SEC’s meeting, they’re still clinging to hope. State legislatures, however, aren’t so zealous.  They’re worried the change could be detrimental to the other Texas schools in the Big 12, Texas Tech and Baylor.

The nation’s premiere football conference, the SEC, could have any team it wants. SEC chairman Mike Silve was quoted last month as saying, “I could get 16 [teams] in 15 [minutes].” Clearly, the SEC holds all the power in this situation. If the SEC does eventually decide to let A&M into the cool kids club, then it is mostly likely a part of a much grander plan we have yet to know.

Previous Post:Fancy Feet
Next Post:From One to the Next: Audio Formats