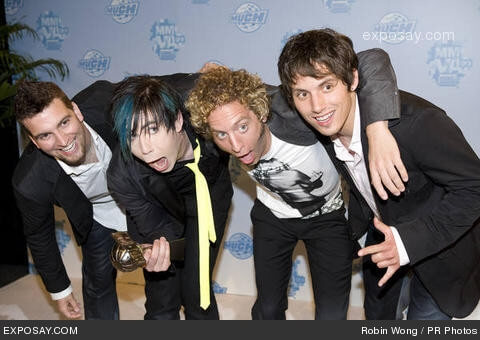 When it comes to music, Canada has gifted us with some pretty incredible acts. The trend is sure to continue when one of its hottest bands, Marianas Trench, makes its way to the states.

Though new to Americans, Marianas Trench has made quite a name for itself in Canada. The band has already released two albums – Fix Me in 2006 and Masterpiece Theatre in 2009 – and fans are anxiously awaiting the release of its third album, Ever After, which hits Canada in November.The band has also been nominated for countless awards, including MuchMusic’s (Canada’s version of MTV) Pop Video of the Year.

We were lucky enough to talk to Marianas Trench bassist Mike Ayley who gave us the details on the band’s sound, shared some great advice for aspiring musicians, and almost had us convinced the guys are actually vampires.

When it comes to the band’s sound, Mike quotes fellow band mate and lead singer Josh Ramsey who describes the band as a “pop rock symphony.”

But the band is far from your average pop act. Not only does it take inspiration from the Beach Boys and Queen, it also based its album Ever After around a fairy tale concept.

But for these guys it’s not just about the music, for them lyrics really matter as well.

“If you actually listen to lyrics they’re pretty intelligent and there’s a concept, there’s a lot pain and reality,” says Ayley.

And its care for music and lyrics has paid off.  The band has scored not one but two No. 1 songs on iTunes Canada Digital Download list.

However, success wasn’t just handed to the band. From 2005 to 2007, when Marianas Trench was trying to hit it big, the band was constantly on MySpace e-mailing fans and trying to promote themselves. The group stayed after shows to meet every fan and shake every hand and take pictures with all of them.

Ayley attributes a lot of its success to their “hardcore fan base.”

“Try every single thing you can to make fans, let your fans helps because without them it a hard mountain to climb,” he says.

But that’s not all the wisdom Ayley has for fellow musicians.

“Always work on your song be willing to take a song that is written and rewrite it, if you can make it better. Work on your live show. Never stop working because it takes along time, unless you’re Justin Bieber,” he says.

It’s now up to the band to take its own advice as it attempts to “crack a whole new country.” But with a fun and fantastical fairytale-inspired music video for its single “Haven’t Had Enough” already getting serious hits on YouTube and an upcoming US tour with Simple Plan on the way, we’re sure the guys won’t have too much trouble.

And if that’s not enough to convince you to give Marianas Trench a listen, then Ayley’s great sell definitely will. “We’d love if people would check out our stuff on YouTube. Give everything a chance. I don’t care if people steal it, if you like it and want to buy it after that’d be great, but we want people to give us a chance. “