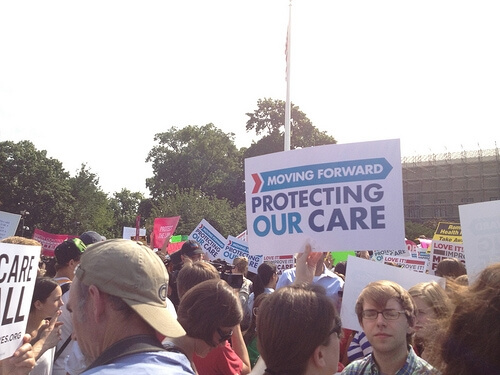 Since the start of his presidential career, Barack Obama has been a crusader for the reform of the healthcare industry in the United States. Today, he has succeeded in making healthcare available for all Americans who have not been able to afford it.

However, the journey for President Obama’s most controversial issue has not been easy. The Patient Protection and Affordable Care Act (PPACA), or informally known as Obamacare, was originally signed into law on March 23, 2010. Introduced in the House as the “Service Members Home Ownership Tax Act of 2009” by Congressman Charles Rangel on September 17, 2009, it was then considered by committee consideration by Ways and Means, a committee that decides on taxes, Medicaid and Social Security. The Senate passed PPACA on December 24, 2009 with amendments and on March 21, 2010 the House agreed to those amendments, finally signing the law into place by the President on March 23.

In a White House statement given on Thursday, June 28, 2012, President Obama explained the logistics of the law. The law is a way for health insurance companies to be obligated to continue coverage and provide a fair rate for children with pre-existing conditions and they won’t be able to drop or “jack-up” a copay for someone if they develop an illness. By this August, 13 million Americans will receive a rebate from health insurance companies because they spent too much on administrative costs and bonuses and not enough on the health care of Americans. This law being passed means that all young adults under the age of 26 will be able to stay on the health insurance of their parents, and seniors will get a discount on their prescriptions which will save five million seniors around $600 each.

Starting in 2014, each state will take the time to create a comprehensive plan conducive to helping as many Americans in their state, according to Obama’s statement. Obama credits a letter in his office from a woman who gave up her health insurance after being diagnosed with cancer 18 years ago because she couldn’t afford it, with being his motivation to have affordable healthcare for everyone. “…Americans have had to worry about not only getting sick but the cost of getting well,” something he says no longer will prohibit Americans from seeking the attention they need.

Obama met adversity when the Attorney General of Florida filed a suit against the law, along with 12 other states, including the National Federation of Independent Business, four private individuals and 13 additional states. Democrats see this as a step in the right direction and say it will expand and transform American healthcare but Republicans see it as intrusive into private affairs and claim that once healthcare is reformed in this way “no area of American life will be safe.” The issues at hand were the constitutionality of the “individual mandate” which requires most Americans to buy health insurance or pay a penalty. They asked if the case should wait until 2015, a year until the mandate takes effect, whether the rest of the law must fall if the mandate is struck down and whether the law coerces states to expand Medicaid, the health program for the poor, according to The Economist article published March 26, 2012.

As a college student with a pre-existing condition called Endometriosis and no health insurance, this will allow me to go to multiple doctors for second opinions. It will also allow me to get surgery if I need it at an affordable rate.

This is also the case for Staceyann Ramlochan, 21, from Long Island, “I have health insurance under my dad but it’s great that I can stay on it to help with medical issues I have always struggled with.” Ramlochan agrees that it will be a good change for the country because it would give more options for people to use many different doctors and “people will be able to live longer lives.”

This law goes into effect in 2014 and marks a huge victory for President Obama, a mission of his throughout his campaign and presidency means that no one’s health “hangs on chains” any longer.

Previous Post:“I Did Anything”: Rookie Blue’s Ben Bass Has Been a Dare Devil Since College
Next Post:Get Outside Already!