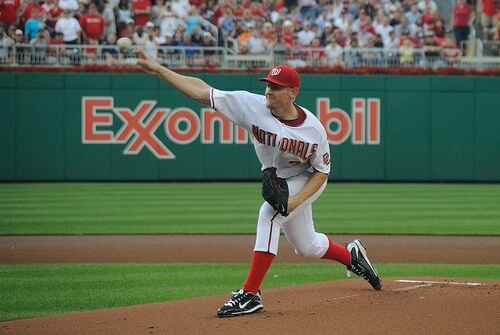 Ah, Washington D.C. The hapless sports capital of America. The town that can’t seem to get anything right. Whether it’s Redskins hilarity with the dastardly Dan Snyder at the helm, the Capitals collapsing under monumental expectations or the Wizards drawing wands on each other in the locker room; the antics in this city almost upstage the clowns on Capital Hill.

So over the weekend, Dan Steinberg of the D.C. Sports Bog clued everyone in on the Washington Natinals’ coddling of rehabbing ace, Stephen Strasburg. Sunday, Strasburg made his first start with the Class A Hagerstown Suns since undergoing Tommy John surgery back in September.

While striking out four of eights batters and throwing straight heat in the upper nineties, he was probably rushed on and off the field in a giant bubble and media members were not permitted to look him in the eye. These among other ridiculous requests were made to avoid a set back in his progress.

Steinberg posted the full release that includes strict times of where the media should be from pre-pitch to press conference.

Don’t you dare get too close to him, he’s just a tender little thing.

Previous Post:Finding Love in the Club
Next Post:Music Notes: August 1-7 2011