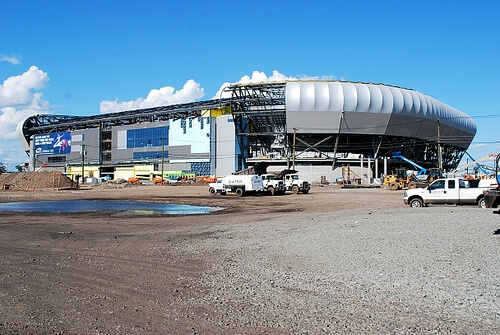 In 2001, Major League Soccer had reached its low point and the three remaining owners in the league nearly called it quits. Attendance at games dropped below 14,000 for the first time in the league’s history.

The league probably would have folded if it were not for the innovative vision of Lamar Hunt.  Hunt believed the professional soccer league could be saved by the construction of soccer specific stadiums.  He thought soccer in the United States lacked the intimate experience needed for the sport to thrive.  The team owners would also be able to derive a profit from hosting other events in the stadiums. The teams could keep all earnings from games and events, instead of paying stadium owners.

In 1999, Hunt made his notion a reality by building the 20,455 person capacity Columbus Crew Stadium. Los Angeles Galaxy owner, Phil Anschutz popularized the stadium-building trend, opening his own wallet to build the expensive Home Depot Center in 2003.

Nine soccer specific stadiums have been constructed since 2003.  The total amount of spectators each season also increased and average attendance has not fallen below 15,000. Sporting Kansas City’s Livestrong Sporting Park opened on June 9, becoming the newest member of the club.  The new stadium has certainly been a success. Attendance at games has nearly doubled, rocketing from 10,287 to 18,107.  The Park is successfully attracting people of all soccer backgrounds.

Kansas City resident Mallory Christian had never seen a soccer game before this season, but she has now been to three Sporting Kansas City games.  “You are getting a group of people who aren’t hugely into soccer,” Christian said.  “I don’t watch it a ton but it is so much fun to go to the games.  You also get crowds that have played soccer forever.”

Hunt’s vision for creating a more intimate experience was successfully accomplished at Livestrong Sporting Park.  “The way that it’s set up, there really is not a bad seat,” Christian said.  “We were on midfield last night and probably the twenty-fourth row was still so close.”

The New York Red Bulls’ Red Bull Arena just celebrated its one-year anniversary.  Like for Sporting Kansas City, average attendance at Red Bull games jumped 6,000 fans to over 18,441 per game.  The Red Bulls have sustained these gate figures, averaging 18,345 fans so far this season.  A member of Red Bull Arena groundskeeping crew, turfgrass intern Ante Rogic, recognized that the spirit of the fans has kept these numbers up.  “It’s so loud,” Rogic said.  “It’s a great atmosphere and a great environment.”

Red Bull Arena has also generated more income by having its first-ever concert, when it hosted Dispatch on June 18.  The Arena was filled to capacity and the New Jersey Star-Ledger writer Tris McCall said, “Although there are no other concerts on the schedule, it's official: Red Bull Arena isn't just for sports.”

Although this stadium movement has been embraced, it may just be a fad that could fade away as Christian pointed out.  “This is just the first year we will see how it goes from here on out,” Christian said.  “Maybe it is something that is just this year.”