You are here: Home / Choosing a Major / Saying Goodbye to My Dreams of Dancing

There are days when my hip still hurts, and with each step I take, the more pain I feel. But the pain isn’t solely in my hip and leg; it is in my heart. You see, without the pain, I can easily shove my long-lost dream to the back of my mind. Heck, most days I can forget that it ever existed. But when the pain resurfaces, so do the memories.

Dance has always been a part of my life.

I started at such a young age that I can’t remember a time where I wasn’t dancing. However, contrary to popular belief, it was not love at first sight for dance and me. In fact, I dreaded going to dance class when I first started at age three. I started sobbing the second I would see my ma disappear through the doorway of the studio. This continued for the entirety of my first year of dance. Dancing seemed to be the last thing that I wanted to do. In fact, when my family traveled two hours to watch me rehearse on a ‘family watch night,’ I refused to dance.

I shocked everyone during my first dance recital. Rather than crying or resisting to dance, I started beaming once I was underneath the spotlight. You would have never guessed it from my response to being left at dance class, but I loved dancing. I knew every single move of all of my dances, and it became very evident to my family that this was something that I thoroughly enjoyed. From that point on, it didn’t take anyone dragging me into the studio anymore. I wanted to be there. In fact, most days I longed to be there—I just wanted to dance.

As the years went by, dance started becoming more and more important to me. It quickly became the thing that I felt most passionate about in life, and it was no longer simply a hobby. Dance became my life and a huge part of my identity. It started to consume my every thought. I started learning different styles of dances, joining a competitive team and choreographing my own dances.

Meanwhile, my love for the sport continued to grow and grow.

Once I got into high school, I started becoming more involved in dance. I made my high school’s drill team, which practiced three times a week, and I continued dancing with my studio that met for practices twice a week.

It felt like I was constantly going to competitions or preparing for a performance. Dance no longer solely consumed my mind; it now consumed my schedule. Although it was exhausting at times, I loved it.

By the time that I started looking at colleges, I had fallen head-over-heels in love with dancing. Despite my passion for the sport, I never considered that dance could be a part of my career someday. I always told myself that it wasn’t practical, that I wasn’t good enough to make it.

Nevertheless, I began pondering the question that most high school students face.

What are you going to do with the rest of your life?

I could be something great. Maybe a lawyer or a social worker.

The more I began talking with my friends and family about making a decision for the future, the more I heard the phrase, “Do something you love to do.” It wasn’t until I heard this piece of advice that my mind drifted to dance.

Yeah, maybe it wasn’t the most practical route to take, but I knew it was what I longed to do. I made the choice that I was no longer going to let fear rule my life. I began dreaming of performing in front of thousands of faces. I started choreographing dances for my future studio. I even dreamt up a logo and a name for it. Although it was a risk, I knew that I wanted to go to college for dance.

At least that’s what I thought.

The doctors told me, “You need to stop dancing. Your hip will never heal if you don’t stop now.” I couldn’t believe it. The more that I was dancing, although my love for the sport was growing, my body began failing because of it. My hips and legs had grown so tired that there were many days where walking became very painful for me. Despite what I was told time and time again, I felt determined to keep dancing. There was no way that I was going to let some doctor rip my dream out of the grip of my hands before I even had the chance to try and achieve it.

I continued to rehearse and perform as much as the pain would allow me to. As time went on, the pain grew worse, and the truth of my doctor’s words became more evident. I couldn’t keep doing this. I had to give up on my dream.

Although I felt heartbroken, I started thinking about what else I would want to do with my life. I ultimately decided to go into journalism. Yes, dance had my heart for a long time, but I had always had a passion for writing. This passion wasn’t as well developed, but I knew that I still loved it.

That is how I wound up at Drake University.

I am grateful to say that I was able to wait until the end of my senior year of high school to end my dance career. It’s wild to think that I haven’t danced on a stage in over two years. The sport that used to act as my outlet of expression, consume my every thought and give me so much joy is now just a distant memory.

Now don’t get me wrong, I firmly believe that everything happens for a reason and that God has me where I am for a much greater purpose. I love the fact that I am an aspiring to be a writer. But there are some nights where the pain is worse than others. I close my eyes and I am back on stage. I can feel the heat of the bright lights on my skin. My heart starts to beat faster with excitement as I hear the music start. Five. Six. Seven. Eight. 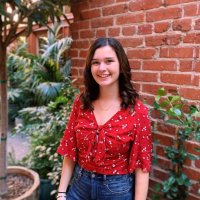 Second-year student at Drake University. I love to read and write, and I’m very passionate about my faith.

Top 10 Covid-19 Safe Spots to Explore Near UCLA
Next Post: How to Survive the Semester Without a Spring Break