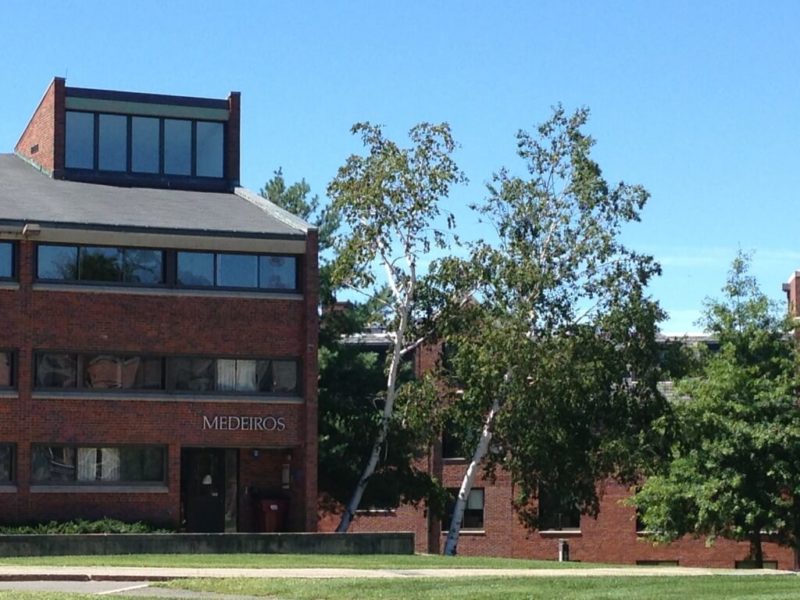 The halls of Medeiros had never been so empty.

Then again, does Medeiros actually have halls? Even after living in it for nine months, I wasn’t sure. Unquestionably the most unique dorm on campus, it had always been difficult to describe. In early September, I couldn’t stop getting tangled up with other clueless freshmen wandering through our 40-person building. Invariably, they wondered how anyone could have been crazy enough to design such a strange dorm. Why had Medeiros’ architect peppered it with half-flights of stairs leading to only four rooms on every landing, separated in the middle by a bathroom or a solid wall perfect for infuriating guests? It would have been nice to have some juicy gossip about the building’s backstory, but alas, nobody knew any. We also would have liked an explanation of why Medeiros, though “co-ed,” was split into three towers that were not internally connected (and, I always wanted to add, not as socially integrated as they should have been): Tower C for guys, A and B for girls.

Later in the year, I continued to find Medeiros’ structure challenging. My best friend patiently ignored me whenever I tried to explain to him that the open vertical space above our lounge was not for unsupported climbing, especially the twenty-foot-high part that could only be reached using the plumbing for footholds. Another friend blew me off when I told him that perpetually leaving a window open made the ever-present Boston wind howl under the door and echo all over the open shaft. Meanwhile, campus-at-large posed its own problems; “Where do you live?” always had to be answered with a clever evasion, since saying “Medeiros” to a stranger usually elicited an “Oh, that’s the Honors dorm, isn’t it?” or just a dirty look. And as for trying to get Boston cabs to find the building? Forget it.

But after letting it thwart my attempts to explain it all year long, I was ready for one more try to capture Medeiros’ atmosphere because this day was special: move-out day. Or at least it was for me. The place felt like a ghost town already, most people having finished finals before me and left shortly thereafter. It felt especially empty now that my roommate had left earlier in the morning. We had passed a whole year of waking each other up too early in the morning, generally not speaking to each other in the afternoon, arguing over which guests to have over in the evening, and disrupting each other’s sleep with procrastinated homework or persistent coughs at night. Now all of the tension had been swept away by a polite goodbye and a plane ride… I guess it wasn’t just people Medeiros was missing.

Checking the time, I realized that I really didn’t have time to be too nostalgic—my mom was driving over to help me pack up my stuff, and since I had made a point to be too “busy” with social plans to clean anything the past few days, it would be tough to move out by our five o’clock deadline. In short, I knew I should just call Medeiros “home” and have done with it. But everybody knew that my real home was the one that lazy repairmen had just ruined halfway across the country. Besides, it didn’t seem right for me to call someplace home when I was just about to leave it. I would never live in Medeiros again, nor would it even remain standing for long, having been sentenced to imminent demolition by a Ten-Year Plan.

So what to call it? As I walked down to meet my mom, I couldn’t help observing that despite Medeiros’ emptiness, I was really in the same situation as innumerable other college students: experiencing change and wondering how to make sense of it. Can a gloriously unique, irretrievable year really be recapped? The only conclusion I could reach was that sometimes, memories must be left to speak for themselves.

We want to hear your take on the college experience. Submit your thoughts to [email protected] Read more here: Student Stream of Consciousness #5.