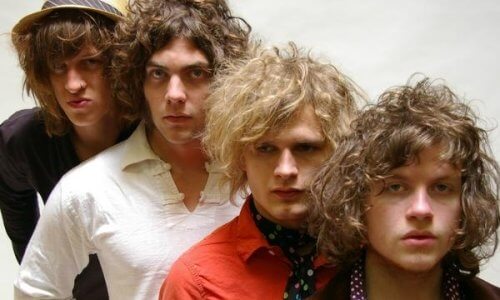 Ready for the Revolution: CM Interviews 1776

Right out of Portland, Ore., 1776 is making their mark on the music scene. Having gone on a west coast tour this summer, the band, which describes their musical style as “retro rock and roll,” has become increasingly popular in their area with hits such as “I Won’t Be Your Prey” and “When You Go.” College Magazine spoke with Chris Cook, 22, one of the band’s guitarists, who gave us an inside look at what he, co-guitarist Nigel Legerwood, 21, bassist Zach Whitton, 19, and drummer Mitch Rupe, 21, do for a living.

College Magazine: Can you tell me a little bit about the band? Who are you guys?

Chris Cook: Originally we are from Longview, WA, a small logging town. We started playing together when we were about 15. We moved to Portland, which is about 40 miles away from where we started, and have been in Portland for four years. We have developed a fan base here and met Courtney Taylor of The Dandy Warhols, who has really helped us out.

CM: How did you get your start?

CC: Two of the guys, Nigel and Mitch, knew each other in high school. It was a small town so people knew each other. I previously had a band with Mitch, but a couple of those guys moved to Nashville and then we started 1776. Mitch came up with the name. I think he just thought it was a cool name. Maybe he was learning something about it in history class.

CM: I see you went on tour this summer. How was that experience?

CC: It was a good experience. We have done LA before and it’s always good there. This was our best tour we’ve done so far. We played seven shows in nine days in LA, and they were all good shows.

CM: How have things change for you recently, especially since your tour?

CC: We did well in LA, and we’ll probably be going back soon. Now we’re just going to keep doing what we’re doing, writing music and recording. We’ve definitely noticed more of a fan base since this tour. It’s been like a snowball effect in LA. More people kept showing up. We haven’t played since we’ve been back in Portland, but there’s been a lot of talk.

CM: What are the band’s plans for the future?

CC: We are working on our second LP now, which should be done within the year, so we’ve been working on that. We’ve been talking to some people who have some pull in the industry. We’re just going to keep doing what we’re doing, unless something falls into our laps and we’ll act on that.

Previous Post:How can you time your climaxes to happen at the same time?
Next Post:NFL Week Three Preview