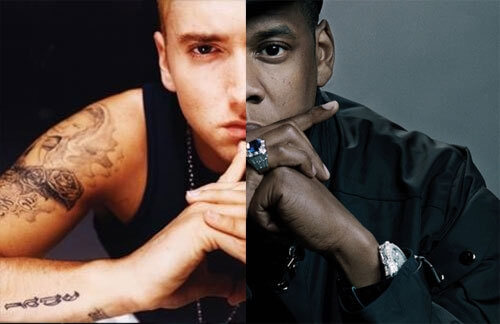 Rappers: The Rockstars of Our Day?

Hot and cold. Apples and oranges. Gold and silver.

And then there’s rap and rock.

Aside from the occasional Girl Talk mash-up album or rare collaboration, these two genres rarely mix. In fact, many would agree that the two couldn’t be more opposite. Guitars versus beats, bass solos versus hooks, drum freestyles versus street freestyles – it may seem difficult to draw any sort of similarity between the two at first glance. However, upon further examination, it seems these two opposite sounds may have more in common than we think.

Some define rock and roll as a genre, others as a time period, and still others as an entire mentality. While the actual birth date of rock culture is hard to define, many regard Elvis as the original founder and first endorser of all things rock and roll, more specifically his 1954 single “That’s All Right Mama.” Even the earliest rock confronted issues like war, rebelling against authority and the importance of lettings one’s voice be heard. It brought a new way of thinking to the hippies of the Sexual Revolution, and hope to a nation divided by racism. Perhaps JoJo said it best in the 2007 movie Across the Universe: “Music's the only thing that makes sense anymore, man. Play it loud enough, it keeps the demons away.”  It let the sheltered kids of the era in on a secret lifestyle unlike anything they had experienced, expanding their minds and capacities for change. And the best part? Their parents hated it.

About 20 years later, in the inner ghettos of the Bronx, a new art form was being born. A far leap from Mick Jagger and John Lennon, this was a whole new sound that seemed to give urbanized America a battle cry of its own. These were the sons and daughters of soul, blues, and spoken word who had figured out a whole new way to use rhythm.  These were also the sons and daughters of those who had experienced the Civil Rights movement of 1960s, who came from impoverished slums and dangerous ghettos rather than sunny suburbs and quiet neighborhoods. They were funky rather than groovy, they had b-boys rather than bassists, and most importantly, they said their piece in speaking rather than singing. A sound which would be dubbed in the late 80’s as hip hop with the help of MTV and a new, visual medium known as the music videos, and would later evolve into rap, which has to come more or less define our generation.

But it wasn’t inner city kids who made rap music into a goldmine, they were immersed in hip hop culture from birth and didn’t have the money for CDs and iTunes gift cards anyway. Dr. Ralph J. DiClemente’s 2003 study, published in The American Journal of Public Health, concluded that rap’s biggest audience was suburban youth “who have better access to cable television channels such as MTV and BET.”  Hip hop and rap introduced its listeners to a whole new way of thinking as well. This time  the focus was the violence of the streets, drug warfare and concepts like “the game” and the struggle,” which would have been completely foreign to anyone who had never stepped foot in a hood. Rap was dangerous, edgy and raw.  And sure enough, parents hate it, too.

Perhaps the similarities of these two very different sounds lie in the attitudes that underlie the music – an attitude of rising above oppression of overbearing authority, financial struggle and any form of thinking that fits a “mold.” Perhaps young generations will find solace in anything that embraces creativity or individuality, even if that means embracing lyrics that promote violence and promiscuity. Perhaps our children will regard Jay-Z, Kanye West and Eminem as the “classic artists” of our days, the same way we hold up Guns N' Roses and Led Zeppelin now. So what do you think? Are rappers the rock stars of our day, or simply promoters of music that will one day be forgotten?