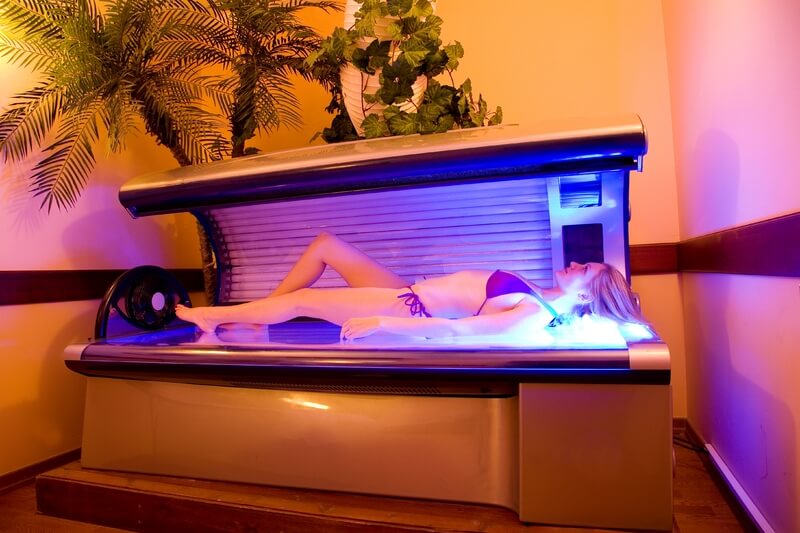 I love everything about tanning salons. The coconutty smell of the lotion, the look of the blue UV lights glowing beneath the plastic barrier, even the feeling of my own skin burning all evoke feelings of happiness and total serenity for me.

Growing up in New Jersey meant that I started consciously tanning outside as soon as I realized it was cool, and it soon became a lifestyle. I spent my summers laying out whenever I possibly could, drenching myself in 0 SPF tanning oil and frying my skin to a crisp (I’m 100% Irish).

When I turned sixteen I started tanning in beds during the rest of the year, and at first I would only go once in a while, but soon I was going almost once per week. Whenever I could get an older friend to drive me, we’d go to the tanning salon and claim that I was 18 but had forgotten my ID at home. It was never hard to get in.

I knew the facts about skin cancer; I’d heard them all before and I knew I was putting myself in danger of developing it. When I got to college I vowed to quit tanning, but going to school in a town with a six-month long winter made it hard to say no to the vitamin D that artificial sunlight offered.

My best friends are Cuban, Venezuelan, Chinese and Italian, and they all look dark and gorgeous by the end of the summer. I opened an account at the Campus Tan conveniently located just across the street from the Boston College campus.

Things finally came to a head about a year ago when I went in a tanning bed for the last time and burned my legs so badly I couldn’t sit down comfortably for several days. One week later my mom called to tell me that she was having basal cell carcinoma removed from her face. I knew it was time to stop.

I’m only 20 years old and I’ve had more than 10 severe sunburns in my lifetime, many of which were the result of tanning in a bed. I began indoor tanning well before the age of 30, which more than doubles my chance of getting skin cancer. I have light eyes and a lot of freckles, and skin cancer runs rampant in my family.

I spent four long years burning my money and my skin at tanning salons, and the most ironic part was that I never actually got that tan. I looked slightly less ghostly, but not noticeably different. Every time I walked into a tanning salon, the chocolate-colored white girl at the counter would smile condescendingly and ask: “Is this your first time?”

It sounds cliché, but my entire life I’ve been bombarded with the message that tan is beautiful, tan is exotic and tan is healthy. Tan is fashionable. That’s ultimately why I started tanning, and I kept tanning because of how good it made me feel.

But it’s not the same as straightening your hair or buying new clothes to change your appearance; it’s on par with smoking in terms of dangerous, expensive and addictive habits that people develop to fit in.

I can’t deny that I still fantasize about falling off the wagon and walking into Sizzle, Hollywood Tans, Bella Bronze, Forever Tan, Island Tans, Darque or Campus Tan. Spray tans never did it for me; I always felt like they were so fake. In retrospect, though, barbequing myself on a bed of light bulbs every week in some bizarre, fruitless attempt to change my skin color was probably just as phony.

Previous Post:Only Halfway Out of the Closet
Next Post:Foreign Policy: It’s Not Just For the Government Anymore