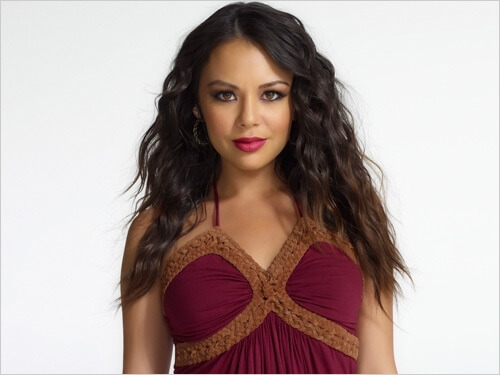 Pretty Little Liars Premiere: My Q&A with A

The day we've all been waiting for is finally here–happy Pretty Little Liars Premiere Day, everyone! College Magazine is celebrating by talking to the show's villainiest villian, Miss A herself. Janel Parrish plays Mona, Hannah's nerdy-turned-popular gal pal who manages to turn our favorite foursome's life upside down. But just because it has been revealed that Mona is A doesn't mean the show is over. There's much more A in store. And with all the damage she's done, it begs the question: is there more than one A? Parrish gives us the scoop on what's to come.

College Magazine: So you've been on the show from the very beginning. What has it been like to be a part of the cast?
Janel Parrish: Honestly it has been amazing. We've been together for three years and everyone is so close on set. It's so much fun. For me, coming to work is like coming to play.
CM: What's it like to play the villain on the show?
JP: It's pretty awesome. I love being Mona because there's just so much that I can do with her character. Playing her is like playing three characters at once. You know there's the cool, popular Mona that you meet in the beginning of the show. But there's also the nerdy Mona that you sometimes see in flashbacks. And now there's this evil Mona who has been A.

CM: How has you life changed since the show began?
JP: It has been completely life changing. I love that I have the opportunity to play this awesome character and really explore the character and learn from it. It's a challenge but it's great.
CM: Will we be seeing more of Mona? Or should I say A?
JP: (laughs) Yup! You'll be seeing both but they're not necessarily always the same person.
CM: Do you have any spoilers that you can share with us for season 3?
JP: The season premiere is called "It Happened That Night" and things definitely happen this season. There's a pretty major event that takes place and Jenna is involved. You have to watch it!
Well there you have it. Now we all have to watch. A's orders! Tune in tonight at 8PM EST, and check out this Monalicious preview in the meantime!
FacebookTweet
Life