Knee bended, eyes shut, closed fist rested on his forehead, humble in prayer: the quintessential image that comes to my mind when Tim Tebow is mentioned.

In the past three games, all defeats, Tebow has not completed more than 50 percent of his passes. He has completed a scant 30 of his 73 passes with just a single touchdown and four interceptions.

Then again, even with the Broncos’ 7-3 loss against the Kansas City Chiefs on Sunday, Tebow’s prayers were answered. The Broncos won the AFC West and are headed to the playoffs.

Tebow has never been a statistical sensation. Since Week 13 against a hap-hazard Minnesota Vikings secondary, when he put together his highest passer rating of his career, Tebow’s shine has worn down.

Having won seven of his first eight first games as a starter was worth the pedestal Tebow was placed upon. There was an aura that the Broncos could win behind Tebow’s unconventional style, making plays with his legs rather than his arm.

All of the hype now appears to be a gimmick. It doesn’t help that Marvel Comics has put the “Mile High Messiah” on par with Super Man, creating a comic book based on the quarterback. With an affinity for pulling off last minute victories like other super heroes, Marvel has pounced on publicity stunt that has become the Broncos quarterback. However, with Tebow’s recent failed attempts at victory these past few weeks, that pedestal he was put on seems to be crumbling beneath him.

In a press conference after last week’s game, Tebow said, “Our receivers did a great job, and our offensive line protected very well. We just have to – I just have to get them the ball."

Next week’s opponent, the Pittsburgh Steelers, will prove troublesome for the Broncos if Tebow continues to struggle. While he has willed his teams to some fourth-quarter wins, he has yet to face a defense with as many talented players as the Steelers. They are the NFL’s best by most statistical measures. 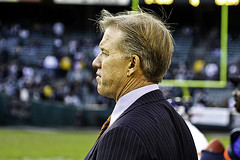 This past week, Broncos Vice President of Football Operations John Elway said his young quarterback needs to “put everything behind, go through his progressions and pull the trigger.”

The Elway-Tebow relationship has had its share of ups and downs. Right now, however, it appears the former Bronco great has full confidence in Tebow to lead the team … for now.

For a guy with so much faith, Elway, the Broncos and the fans must hope  their former Heisman Trophy winner can rediscover his winning ways.

Previous Post:Facebook Timeline: Get Used To It
Next Post:What’s Good in 2011: Top 10 Celebrities of Last Year