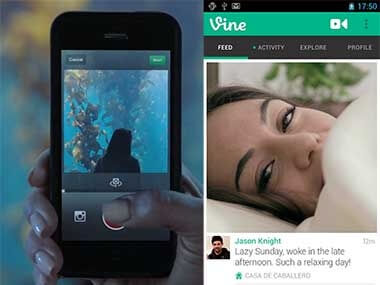 Picking the Vine: Will the Original App in the Video-Sharing Craze Stay on Top?

Alyssa HolcombJun 25, 2013
Home » Latest Posts » Picking the Vine: Will the Original App in the Video-Sharing Craze Stay on Top?
FacebookTweet

In our media-crazed age, it doesn’t take long for things to go “viral” – days, maybe hours. But with Vine, a new video app launched by Twitter, that timeline is even shorter – it takes a quick 6 seconds to not only film a video, but share it from smart phone to smart phone.

In January, Twitter launched Vine, a play on the word “vignette,” as an iOS-only application that created stop-motion videos with a six seconds maximum length. In a half a year, Vine has already garnered around 13 million users and has begun spreading its branches to other smart phones including Androids.

Much like other popular apps, Vine users range from celebrities like Josh Peck and Tyra Banks to those who are “Vine famous” like Marcus Johns (who’s clips are also on his YouTube channel). But the video format that Vine promotes allows for all users to film anything they want, meaning that the majority of the loops are more random (and subsequently hilarious).

“Vine is hilarious! People post some of the craziest, darkest humor things,” said Laree Thomas, an English major from the University of Florida. “I think it can be just as popular as Twitter because it has hash tags and you can relate and find things similar to what you like specifically.”

With a video app that creates “gif-like” loops, you’d think that there’d be few drawbacks on the capitalization of both the humor and short attention span of many users. However, with the app still in its infancy, there are still a lot of issues that are prevalent. For example, Android users, although new to the proverbial Vine, have a newly added feature that iPhone users do not – the ability to zoom during their video-making process. More updates for the iPhone and Android apps are expected soon to remedy these problems.

“Sometimes it doesn't tell me when people follow me,” said Katie Leworthy, an Elementary Education major from the University of South Florida. “You [also] used to not be able to tag people, but I think they fixed that. I also think they should let you do a little more than just 6 seconds, even though I know that's the appeal.”

And now, with the very recent unveiling of Instagram’s own video-making formaton June 20, Vine faces the ultimate challenge of time: will they be able to fix their inconsistencies and subsequently maintain their popularity? Instagram’s new feature has arguably covered the same amount of territory that Vine has in six months with a 15 second time limit and immediate usage for both iOS and Android users among its top qualities. Add in the app’s already featured filters and the videos are now longer, prettier, and (perhaps) more accessible for users.

Obviously the “best” app can’t be determined in a day, or even months, but with this new threat facing it, those behind Vine will have to expedite their efforts to not only stay on top of the trend, but on top of the innovation of the mobile videography craze itself.

Previous Post:Picking the Vine: Will the Original A
Next Post:The Wonderfully Wasteful Reddit Experience