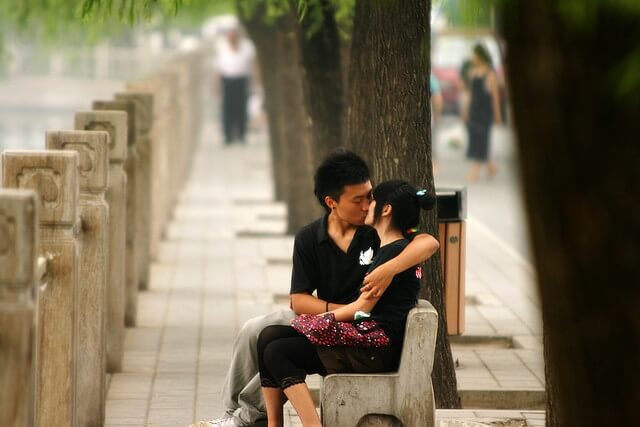 There are a variety of reasons why couples participate in PDA. Sometimes, they are so in love that they barely seem to notice that they’re in public. Other times, they are slightly intoxicated and have lowered inhibitions causing them to show more affection in front of people than they normally would. And often, it can feel dangerous and sexy knowing that others are watching a private act, a form of exhibition that can crank up the heat of a simple kiss.

Whatever the reason, it’s important to remember that you are in public and your actions can make others feel uncomfortable. Those around you may have very different views on PDA than you do. Opinions on the subject span on a wide spectrum and you never really know how those around you feel.

“I’m okay with [PDA] until it starts getting really heated,” said Steven Kirby, a sophomore at the University of Cincinnati. He said that his personal style is slightly conservative, but that he doesn’t see it as a “big deal.” Amanda Espaldon, a sophomore attending Xavier University, felt more uncomfortable with others’ public displays of affection. “I think there's a limit to acceptable PDA. I don't think you need to have PDA all the time, or even at all,” she said, adding, “If there’s too much, it just gets awkward.”

So while you and your partner might both enjoy PDA, others around you might not feel the same way. Public displays of affection are always a question of degree and some forms are more acceptable than others. Holding hands is generally acceptable, even in more conservative situations. Quick kisses are often seen as sweet and romantic. Anything beyond that, and you risk offending others.

So how can you show your partner you care without sucking off their face in front of your friends? Get creative. After all, holding hands for several hours can get boring, not to mention sweaty. A flirtatious text message in a crowded room is sexy and discrete. Simple acts like sharing food, holding open doors or buying each other drinks, are a way to show your affection without making those around you squirm.

In some situations, PDA is expected and accepted; dark frat parties and bars are often privy to the most scandalous of public acts. Getting a little hot and heavy here will probably not offend those around you, though it may elicit rolled eyes and remarks including the phrase “get a room.” The same actions at brunch, work, or church would probably result in much stronger reactions. If you spend time as a couple hanging out with your other friends, PDA can affect how much these friends enjoy their time around you and how they view you as a couple. While your friends’ opinions should not make or break your relationship, it’s always a good sign if they’re on your side… and excessive PDA can hurt that. “I don’t think PDA is necessary when you’re out with other friends,” Kirby agreed, although he generally feels okay with couples being included as part of the group. Espaldon clarified that “the degree of their PDA affects how comfortable I am” hanging out with a couple.

Perhaps you are so in love that your inhibitions are lowered or perhaps you enjoy a little exhibitionism. Whatever your reason for enjoying PDA, keep in mind that those around you may not enjoy it quite so much. Public displays of affection should never be an essential part of your relationship’s survival and should be toned down in situations that require more decorum…and if you’re ever in doubt: “get a room!”