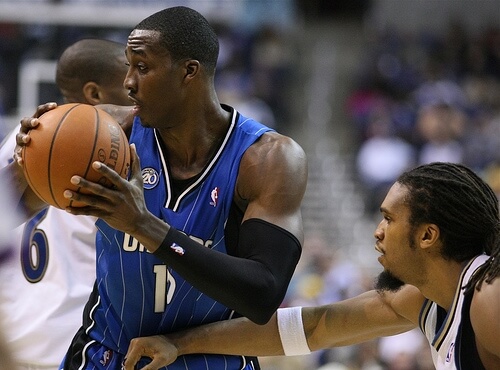 Amid all the superheroes, anime characters, and fanboy/fangirl costumes in the exhibit hall at Comic-Con International in San Diego, standing out is nearly impossible. That is, unless you happen to be a 6’11” African-American man wearing sunglasses, a purple hoodie with a brown jacket, with a mischievous smile telling onlookers he understands that he’s larger than life.

It isn’t often Dwight Howard, Orlando Magic center and member of the voice cast of the Disney cartoon Kick Buttowski: Suburban Daredevil, is not the biggest rock star wherever he goes. If he were on the stage in the 6,500-seat auditorium in Hall H with Steven Spielberg or Patrick Stewart, Howard would be practically invisible.

“I’ve never really thought about it like that,” said Howard laughing while sitting next to a cardboard cutout of his character, Rock Callahan. “I just want to have fun and that’s it. I’m representing Rock Callahan today. It’s not about being Dwight Howard but having fun and promoting Disney and Kick Buttowski.”

When I spoke with Howard, he had yet to actually spend time on the crowded Comic-Con floor. Considering this was his first Con, he seemed like he would rather be an attendee than a special guest.

“The experience has been great,” said Howard. “I mean being here, seeing all the different costumes… people really believe in these characters. I really wish I could come every year and dress up as someone new.”

Before he can show up as either the Man of Steel or his other favorite hero, Thor (“He’s pretty cool.”), Howard has a series to promote.  Kick Buttowski is the tale of young Clarence “Kick” Buttowski (Charlie Schlatter) and his quest to become the greatest daredevil of all time. How exactly does Howard fit into this universe?

“Rock Callahan is sort of like the superhero version of Shaft,” Howard said. “He’s strong like Shaft, the ladies love him, and he’s just awesome. All the kids want to be like Rock Callahan.”

The cardboard cutout of Rock shows that the character is clearly modeled after Howard physically, but Dwight seems to be taking after his alter ego lately. Not only are they wearing almost the exact same outfit, but Howard is even wearing a fake soul patch beard like his character’s. Where does Dwight end and Rock begin?

“Rock and Dwight are similar in the fact that people look up to them,” Howard said. “We’re very strong, laid-back people.  We inspire kids all around the world.”

This is his first foray into the world of animation and voice acting. What better way is there to take your mind off a lockout than by pretending to be someone else?

“It was a lot of fun,” said Howard of his experience portraying an animated character. “It’s something I’ve wanted to do my whole life. Being on this show and working with the rest of the guys has just been awesome.”

Anyone who has heard Howard’s impression of his coach, the small but loud Stan Van Gundy, knows he has been honing his vocal talents for an opportunity like this for years now.  When asked if he was willing do his famous voice, Howard immediately raised his voice to a high pitch only known to dogs and, in Van Gundy’s classically hoarse style of yell-talking, proclaimed:

Dwight Howard: the ultimate class clown who might, when his career eventually comes to an end, decide to take his talents to the entertainment industry. As long as he doesn’t follow Shaq’s lead and make Kazaam 2, he will be fine.