When I was little, I did everything. I played outside with my friends for hours, took several dance classes, and played tennis, soccer, swimming, basketball and kickball. My elementary school held “Before School Sports” where the gym would open before school and put on activities. I joined in my elementary school’s dance troupe fourth grade and fifth grade, spending at least one day after school every week at practice. I did a cartoon club, drawing. In middle school, I joined the drama club in sixth and seventh grade.

I absolutely loved sports and playing outside. I would go to the park with my neighbors, sisters or friends. We could spend hours there. Some days I spent hours on the computer, but I spent about the same amount of time outside. I went on long bike rides with my dad or jumped on the family trampoline. In the summers, we put a sprinkler underneath the trampoline or set up a slip ‘n slide. I’d go to the local waterparks and stay there for hours.

But when I tried something, I never stuck to it for long.

My sisters and neighbors were on the city’s swim team, so I joined. Two years in, I quit. I played soccer for years at the local athletic club. I played tennis for two summers and kickball for a short period of time. At each activity, I made friends and had a blast. They gave me an excuse to go outside.

Drama club in middle school made me feel like part of something, even with small roles. After the first show, everyone went to Culver’s to celebrate. We fit 15 people into a group made for five. As the “prop master” for the musical that year, I had to go to almost every rehearsal. After that, I knew theater wasn’t right for me.

I joined choir in the fourth grade. Each year I fell more in love with the idea of singing. Learning different languages, learning different stories, getting opportunities I never would have without it, like singing at the Wisconsin State Capitol or singing at the governor’s mansion for the governor’s wife. It wasn’t like band or orchestra where we competed in a different city. I sang until senior year of high school, and as it ended, I didn’t know what to think of it. It broke me to realize how much fun I had and that it would never be the same.

At the last concert of the year, seniors typically sing a song called “Benediction.” During the song, they go off the stage and go into the audience, looking out onto the stage at the sophomores and juniors. Leading up to the concert, we practiced the song in class and during lessons. Like my classmates, I found it harder and harder every time we sang it. At the concert when we finally sang the song, I managed to get through the first part. Then we got off the stage, roses in hands, walked into the audience, looked out at the sophomores and juniors, singing the final lines of the song, and I lost it. I could barely get through the remainder of the song because of my tears.

Choir was the only club or organization that I had been part of for more than two years. I’ve been in dance, sports, band and drama club. I never stuck to any of those for as long as I’ve stuck with choir. It changed my life.

Participating in college is… different.

Now in college, I’m 21 and I can’t remember the last time I played a sport not including in gym class. I spend more time on my phone or watching Netflix or Hulu than I do outside. I’m barely outside. I never work out;  I know that needs to change and I want that to change. Maybe it’s that I’m not as motivated as I used to be. Maybe I don’t see that it’s worth it.

I know what I want to do with my life: write. When I need to interview someone or go to an event, I go out to do it. I never went to events in high school—I went to one football game and that was it. I haven’t gone to any college events yet except for the talent show. (And I went because someone from Mean Girls was the emcee.)

High school is not college. College is not high school. They each build in different opportunities for students, but that doesn’t mean it all need to change.

I’m still me—just older with less time on my hands. I’m always writing or doing homework or going back home to see family. And I’m trying to change and be better. Doing all of that in elementary, middle and high school has helped because I experienced things I never would have, made friends, tried new things, gave me opportunities to figure out what I really want to do with my life. And now I know. 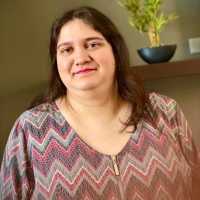 Fourth-year junior at UW-Oshkosh with a passion for writing and all things entertainment. Journalism major with an emphasis in multimedia.

Club Sports: Another Commitment or a Home Away from Home?
Next Post: College Professors Are People, Too