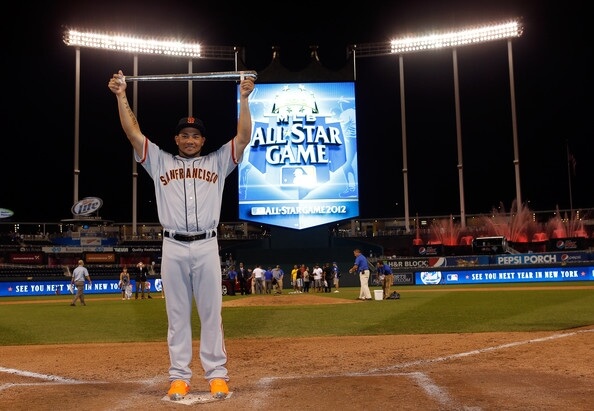 One league had the two best teams by record (Yankees and Rangers), the highest voted player in Midsummer Classic history (Josh Hamilton), the Home Run Derby champion (Prince Fielder), the best pitcher by ERA (Jered Weaver), the best rookie in the game (Mike Trout) and home-field advantage in this year’s MLB All-Star Game. All the makings of success for the American League… or so it would have seemed.

This year, it was this league’s little sibling that embarrassed the usual favorites on Tuesday. The National League trounced the American League by a score of 8-0.

They did so by calling on the 2010 World Champion San Francisco Giants to provide enough insurance to guarantee the NL with home-field advantage in this season’s World Series in October.

Pablo Sandoval, the Giants’ third baseman, hit a three-run triple off of reigning Cy Young and MVP Awards winner Justin Verlander in the first inning setting the tone for the rest of the game. The NL went on to finish that initial inning with five runs off of the AL’s ace.

Giants’ outfielder Melky Cabrera, who played for the host Kansas City Royals last season, earned the game’s MVP honors after he went 2-for-3 with a two-run homer in the fourth inning. Cabrera, who led the NL with 119 hits at the break, is the fifth Giant to win the All-Star MVP, and the first since Bobby Bonds in 1973.

When Matt Cain pitched a perfect game earlier this season, who knew that he would be the eventual NL starter on Tuesday, especially after the breakout first half from Mets’ knuckleballer R.A. Dickey. Nonetheless, the Giants’ star pitched two shutout innings en route to getting the win. He threw to his normal catcher in Buster Posey, who set an NL record for votes with over 7 million votes.

The American League, who won 12 of 13 All-Star Games from 1997 to 2009, has now lost the last three. The game, which decides the home-field advantage in the World Series, has proven that the winner matters, making it more competitive for fans and players alike. The Giants and Cardinals won the last two World Series, respectively, ensuring that home field advantage paid off in the end.

In other news, Yankees’ star second baseman Robinson Cano was booed on both Monday and Tuesday nights by the hometown Kansas City fans simply because he didn’t choose Royals’ slugger Billy Butler to compete in the Home Run Derby. The moment clearly affected Cano as he went homerless in the Derby.

A nine-inning All-Star Game record 61 players took part in the game – surpassing last season’s 60. The game also marked the last time the Houston Astros will be represented in the National League, as they will be moving to the AL West in 2013.

Washington Nationals rookie Bryce Harper also became the youngest position player to ever play in the Midsummer Classic at 19. And he looked really great losing a pop-up in Kauffman Stadium’s bright lights.

Previous Post:Freeh Report Claims Penn State Officials are to Blame
Next Post:I Got Rejected From my Dream Internship