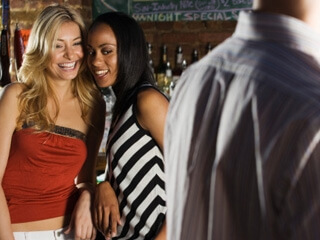 Here it is, the absolute truth when it comes to the rules of dating: they don’t exist. Rather than following some mythical doctrine of what will or will not help you find love, intuition and the most basic of social cues are truly key when it comes to romance, love, and sex, and no guidebook can ever tell you how to find the perfect soulmate/fuckbuddy for you. Some of the best relationships come from breaking all the rules… if you do it right. Keep reading over the next few weeks as I debunk the most fundamental myths of modern dating.

Who doesn’t love being chased? That’s the issue – both genders do, and now it’s not as taboo for a woman to initiate a little somethin’ somethin’ as it was back in the 1950’s, when the very idea of dropping your apron and going out on the town was a downright sin. Suck it up, ladies, and say something. Men adore the attention, they love the surprise, and if you’re confident enough to make yourself known, you’ll be immediately recognized as someone who can hold her own – a very attractive trait in the eyes of most men.

Patti Stanger, the much revered, super feared “Millionaire Matchmaker” of Bravo television film, has chastised plenty of women for exuding “masculine energy” by approaching a man first. But this has been my strategy for the entire duration of my dating career, and my diary can tell you, it’s worked.

Step 1: Scope out the scene before you make your move. While I’ve seen girls hook up with multiple people in one night and get away with it, I urge you to be better than that, even if it’s just for tonight. Tapas is great, I get that. But tonight we’re going after the filet mignon. Once you’ve isolated your target, tuck him in the back of your mind and concentrate on having a good time. Happiness should first come from within, and if you try to prove how much fun you’re having by screaming, hair-flipping and looking at him every time you laugh at a punch line that wasn’t too funny, the scent of desperation wafts in his direction, pushing him further away.

Step 2: Now that you’ve found your guy for the night, find an excuse to initiate conversation with him – this is key – AND his friends. You know that feeling when you’re out shopping, and both you and your best friend find a killer skirt at the same time? You want that skirt. You need that skirt.  It would look better on you, you’d wear it more often, and she’s got plenty of skirts like that in her own closet anyway. That skirt is yours, dammit. Now be the skirt.

By attracting the attention of a group, you become a commodity. Everybody wants to be around the funny chick, the smart sassy one with command of the crowd. Win over his friends’ approval and you’ll get his. So maneuver it so that you’re talking to anyone in his group. Start with any trick: The “Are you in my English class?”  Or maybe the “I think you just took my drink… Really, didn’t peg you for a Sex-On-The-Beach kind of guy.” Even the “How is it that I’ve never seen you and your friends here before?  You’d think I would’ve noticed…” is a clichéd but sometimes successful line.  The idea is simply to make contact. You don’t have to be a stand-up comedian, but laughter certainly singles you out from a sea of wailing girls who “love this fucking song!!!” Once one friend realizes how wonderful and witty and awesome you are, his friends will gather around the marvel that is you, you social butterfly, and you can initiate step 3.

Step 3: Ignore the shit out of him. Okay, so that’s a little drastic… But what we’ve got here is a basic take on Strauss’s modified “String Theory.”  Before you panic, it’s got nothing to do with Stephen Hawking and everything to do with kittens. If you’re a college-age girl, you’ve watched a kitten play with string and be entertained for hours. But when is that furball most enticed by the string? As it’s being pulled away.

So amaze the throng of best friends by whom your hottie is surrounded, knock them dead with stellar wit and your best anecdotes about campus shenanigans. Remember how they tell you that you can be anyone in college? This is one of the few times that’s true. These guys don’t know you, so put your best self forward and project the person that you want to be. While you’re showing your stuff, try your best to direct your attention towards the group as a whole, rather than just your guy. By doing this, your boy will start to wonder when he gets special attention. At the risk of sounding Stalinesque, the power is now in your hands.

Step 4: After a decent amount of entertaining, call for an intermission and ask your boy to go somewhere more private. Not your boudoir, crazy girl, but a corner or table where you can actually talk. Here’s where you try to really truly connect.  If this is going be worth anything, conversation is an integral part of making a situation into “A Situation.” Take this time to showcase your intelligence, your passions, your sense of humor, information about yourself, and of course, ask him about him. Make it clear that you’re interested with little touches on the arm, steady eye-contact (no pinball glances around the bar), and plenty of laughter.

Step 5: Stop a little short. Here’s the hard part – you’re gonna have to pull out a little prematurely, and for once, that’s okay. The idea of “the mysterious woman” is overplayed, but for good reason. Rather than staying until you run out of things to talk about, you should cash in your chips right before you lose it all. Get his number, tell him you’ll catch up with him soon, and make sure to give him yours. Asking for his number shows your interest, but giving him your digits puts the ball right back in his court. Trust me, he’s going to want to play ball.

So there it is… one simple template for talking to a guy. Remember that this is simply a guideline, with plenty of room for deviation. Not a concrete formula, personalize your strategy by being yourself and if you’re making a real connection, that’ll come through in your interactions.  This method is scarily effective, as it’s mostly based off the psychology of human interaction, so use it with care. Enjoy your newfound confidence, beauties, and don’t forget to invite me to the wedding.