You are here: Home / Life / Health / I Had Mono Freshman Year and it Sucked

Waking up in the inferno that I called my freshman year dorm never came easily. I quickly became accustomed to the sound of my roommate’s flip flops at 6 a.m. and the vomit-inducing dread at the thought of getting out of bed for a lecture on the heat capacity of the Atlantic ocean. However, on one particular November morning, my polaroid-lined abyss seemed exponentially more grim.

Immediately upon opening my eyes, I knew I had yet another fever. Fevers had become a persistent visitor in Hades, raising suspicion that my roommate was poisoning me in my sleep. Unfortunately, this morning my fever was accompanied by swelling in my entire body. I sat up, hit with a dizzying lightheadedness that made me faint almost immediately.

For the next three hours, I found myself stuck in a hellish seesaw between a horizontal position and unconsciousness. I knew I needed to eat something, but my attempts to reach my snack drawer resulted in me comatose on various areas of the floor. Finally, my suite-mate came to my rescue with a bowl of oatmeal, made with a contraband microwave. The grey mush made me increasingly nauseous. But I still inhaled it in hopes of being able to stand for more than 10 seconds. I got dressed and began my 20-minute walk to the health center.

If my periodic stops to get in the fetal position on a bench weren’t embarrassing enough, I realized halfway there that I wore one Black Nike shoe and one white Converse shoe. I considered walking barefoot almost as much as I considered dropping out of college, ultimately deciding against both. Six hours, eight fainting episodes and a liter of blood later, the doctors diagnosed me with mono and Hepatitis Ebv. The latter seemed an ironic cruelty considering my recent interactions (or lack thereof) with the male species, but the weirdly enthused doctor assured me it was a complication from the mono.

The next few weeks consisted of a hazy period of fretful sleep, golf cart rides to my classes, dramatic statements about my imminent death and hysterical crying phone calls to my mom.  My roommate offered no comfort except a box of wet wipes that appeared on my desk with a note that read “disinfect your area.” It didn’t stop there. The majority of food made me nauseous, so most of my meals consisted of blue Gatorade, Pringles and gummy worms. That gave my already swollen body a hefty push toward the freshman 15.

When my blood results started coming back more normal and my energy rose from its previous spot at none whatsoever, I decided I could resume some of my daily activities. First on my list? Frat parties. My doctors gave me strict orders to avoid alcohol at all costs (as if my crippling nausea wouldn’t take care of that on its own). Thus, I embarked on my first stone cold sober Thursday night on frat row.

Here are the highlights of that night: Attempting to pass off drowsy swaying as a dance move and mostly succeeding, then dancing (swaying) with a semi-decent frat boy. He seemed semi-decently coherent, but then my drunken friend interrupted, asking me “How’s the hepatitis?” just loud enough for semi-decent frat boy to hear. I attempted to explain the unconventional circumstances around my form of hepatitis to a terrified semi-decent frat boy, only to be quickly drowned out by the trap music as semi-decent frat boy made a not-so-smooth exit. My grand finale involved falling asleep on a vomit-ridden couch next to an aggressive couple doing what I can only assume was eating each other.

None of these experiences were ideal. But by far the worst part of being sick your first quarter of college is that no one really cares. Girls in your dorm will give you the passing “OMG! Tell me if you need anything!” and your mom will shoot you the occasional “feeling ok?” text. But at the end of the day, you can only rely on (and whine to) yourself. Your teachers will expect attendance and quality work. Finally, your newly acquainted friends will go out without you. And you can bet your roommate will complain that you haven’t taken out the trash.

You quickly realize that independence means much more than staying out all night and wearing whatever you want. Being independent means picking up your own prescriptions, Ubering to the hospital alone and cleaning your own barf bowls. We call it mono for a reason. 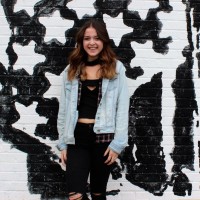