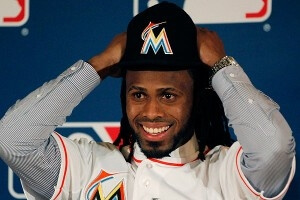 The Marlins franchise is in the midst of an eight-season playoff drought since their World Series victory in 2003. Last season, they finished dead last in the National League East with only 72 wins – nine games below .500.

In 2012, the Marlins are attempting to resurrect their franchise with a new ballpark, new home city and, essentially, a new team.

This young franchise, which has only been in existence for 19 years, used to play its home games in Sun Life Stadium in Miami Gardens, Fla. The high life? – Anything but it. They were forced to share the stadium with the nearby football team, the Miami Dolphins.

But this year, however, the Marlins will open up their new stadium, Marlins Ballpark. It’s then that they’ll play their first game in their new uniform, fresh with a new logo and new color scheme. In their home-opener April 4, they will play host to the reigning World Series champions, the St. Louis Cardinals.

The changes have created a buzz around the city and the team that is comparable to that of the Big Three of the Miami Heat.

Much of that hype comes as a result of the roster moves the Marlins’ front office made this offseason in order to compete in a tough National League East division.

The Marlins signed superstar free-agent shortstop Jose Reyes on Dec. 4, 2011. Reyes, a four-time All-Star, won the batting title last season with the New York Mets after posting a .337 batting average. This move will bolster an already-talented Marlins infield, highlighted by third baseman Hanley Ramirez, a former Rookie of the Year and three-time All-Star.

The Marlins also agreed to terms with former San Diego Padres closer Heath Bell. Bell is coming off of an All-Star season in which he recorded 43 saves with a 2.44 E.R.A. He will anchor a Marlins bullpen that has been lacking in big names and shutdown guys over the last few years.

On Jan. 5, the Marlins finalized a trade with the Chicago Cubs that brought in Carlos Zambrano. A controversial and loudmouthed starting pitcher, Zambrano also brings a veteran presence to the Marlins’ rotation. He’s assembled a 125-81 record in 11 years in the South Side.

To finish things off, the Marlins signed free-agent starting pitcher Mark Buehrle to a four-year contract. Buehrle has been the longtime ace of the Chicago White Sox, coming off three consecutive Gold Glove seasons. Oh yeah, he also pitched a perfect game in 2009.

The additions of Buehrle and Zambrano will take some of the pressure off of the young Marlins ace Josh Johnson at the top of the rotation. Reyes will do the same to Ramirez on the offensive side. The team also made a heavy push for Albert Pujols this past offseason, though they fell short.

The Philadelphia Phillies have won the NL East the past five seasons. Before that, the Atlanta Braves won every year from 1995 to 2005. And despite two World Series championships in 1997 and in 2003, the Marlins have yet to claim the division crown.

With some big-name moves before the 2012 baseball season, the Miami Marlins hope to change up the tradition in the division. And maybe a playoff appearance is in sight – one that can hopefully set a new bar than the one that some team from Florida set in 2003.