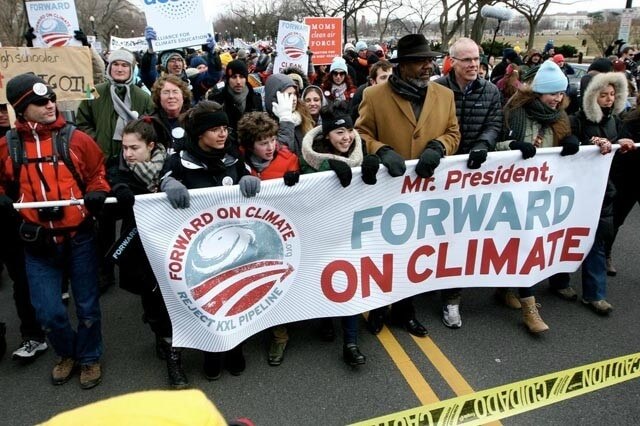 Thousands of protestors made their way to the nation’s capital on Sunday in an effort to urge President Obama to deny construction of the Keystone XL pipeline.

According to The Guardian, participants in the “Forward on Climate” rally came from over 30 states and included environmental activists, indigenous Canadian groups and landowners who would be affected by pipeline construction. “Obama holds in his hand a pen and the power to deliver on his promise of hope for our children,” said Michael Brune, director of the Sierra Club. “Today we are asking him to use that pen to reject the Keystone XL tar sands pipeline, and ensure that this dirty, dangerous, export pipeline will never be built.”

The completed pipeline would extend for 1,179 miles from Northern Alberta in Canada to Steele City, Nebraska, transporting tar sands oil to be exported to other countries. The Sierra Club has actively opposed the Keystone XL project since 2009 and helped organize Sunday’s rally.

Isabelle Riu, a senior at George Washington University majoring in international affairs and environmental studies, attended the rally despite the winter weather. “It was an incredibly cold and windy morning, but the energy did not waver,” she said. According to Riu, tar sands are an incredibly dirty fuel source that will produce carbon emissions during extraction and processing. As president of Green GW, a student organization advocating environmental sustainability, Riu attended the protest to show her concern for climate change.

The crowd’s main goal was to remind President Obama to follow through on the promises he made in his inaugural speech and the recent State of the Union address regarding the environment. “I think that Obama has tried to play it safe for his first term, trying to appease both sides,” explained Riu. “I hope to see more bold action to fight climate change this term.”

The name of the rally itself comes from Obama’s reelection campaign, which featured the slogan “Forward.” Connor Schmidt, a George Washington University freshman majoring political science, believes that the reference sends a clear message to the White House. “I think that this combined with his comments about climate change at the inauguration and State of the Union will make it incredibly hard for him not to shut down the Keystone XL project,” Schmidt said.