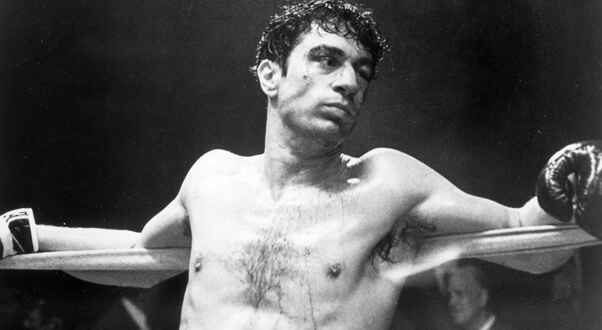 After seeing the East Region and North Region, next up: the West:

An emotional, self-destructive middle-weight champ promises for an entertaining story. LaMotta was only knocked out once in his 14-year career is convincingly portayed by Robert DeNiro and demonstrates a battle of his arduous life. Burt Reynold’s Paul Crewe is a convict who brings prisoners together in a football game to defeat the guards. I’d say to compare the two is impossible. Both movies are great in their own way. But to compare the athlete, Raging Bull’s Jake LaMotta is the ultimate fighter, there’s no way he would lose this fight. WIN: Jake LaMotta
-Ashley Melfi

Muhammad Ali is a bad man. He’s not afraid of anyone, and if you step to him he’ll beat your ass. But I’ll pose this question: what if the Soviet Union stepped to him? What if the dreaded Reds stepped to him when he was just a pup in the boxing game? Could Cassius Clay punch a hole in the Iron Curtain? I think it’s debatable. If he was under Herb Brooks’ guidance he certainly could have, and that’s what makes Brooks so great. Ali could stand up to any man, but he never had to stand up to a dominant world power, with a group of amateurs at his side no less. This would be a battle, no doubt. I think Brooks’ experience playing in a tournament full of heavyweights like the ‘80 Olympics gives him another edge. Brooks’ brains and experience in a big stakes tournament would eventually outlast Ali’s brawn. Also, this speech rules. WIN: Herb Brooks
-Taylor Schwink

Talk about a Duke vs. VCU matchup here. Forget about the seeding, Sidney Deane has never been an underdog, and contrastingly there’s a good chance Papale was even an underdog to be born. I heard his parents were expecting a girl. Another contrast: Deane would rather look good and lose than look bad and win (Anna Kounrnakova and Andy Roddick style). Papale on the other hand, would agree to look like Screech from Saved by the Bell for the rest of his life in return for a win at one mere backyard football game. My plan was to pick Deane in this one because he is much cooler, and isn't that what college is about? But after my reading my first sentences, my Christian background simply can’t let me. Papale moves on and Deane goes back to hustling unsuspecting white dudes. WIN: Papale
-Joe Cipollone

Reg from Slapshot is nothing short of hilarious. A gem of a character. But the hilarity of Reg does not hold a candle to the presence of a sports movie God such as the one and only Herman Boone. Boone would be a top seed in a coaches-only sports movie bracket. He is the epitome of a great coach and Denzel is one of the great actors of our time. It does not hurt that ABC Family plays Remember the Titans at least once a day. Boone with the emphatic W. WIN: Boone
-Danny Golden

Previous Post:5 Signs Your Relationship Won’t Work
Next Post:Year of the Woman