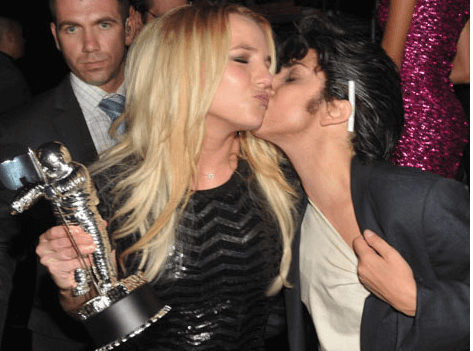 It wouldn’t be an awards show (or MTV) without a few over-the-top moments, and thanks to Top 40 favorites Lady Gaga, Beyoncé, and Britney Spears, this year’s Video Music Awards did not disappoint.

Possibly the most shocking moment of the VMA’s (and maybe the whole summer?) was when Lady Gaga stepped out not in her standard 12-inch armadillo heels, but in drag.  Dressed in black pants, a dingy white tee, boots, and a black pompadour hairstyle, she introduced herself to the audience as Jo Calderone, Lady Gaga’s supposed ex-lover: “Lady Gaga. She left me. She said it always starts out good and then the guy – meaning me, I'm one of the guys – we get crazy. I did. I got crazy, but she's f-ing crazy too, right?” Wise words, Jo.

Unsurprisingly Gaga’s outfit wasn’t the only jaw-dropping part of her routine. Reminiscent of a certain 2003 on-stage rendezvous with Madonna, Gaga went in for a kiss with Britney Spears while she accepted her Michael Jackson Video Vanguard Award.  Gaga (er, Calerone) referred to Spears as a “pop music legend” and admitted to hanging posters of her over on his wall while he “touched himself” in bed. Too much information? To make things weirder, Calderone then cued a slightly disturbing Britney Spears tribute of young girls dancing around to Britney hits.

On a less ridiculous note, Calderone and Spears left the stage to announce Beyoncé’s performance of “Love on Top.”  But who could pay attention to her (amazing) performance when she was proudly displaying a new baby bump? Yep – if you haven’t already heard (which is hard to believe), Beyoncé is pregnant! The singer embraced her new bump last night under a gorgeous one-shoulder red gown, topping off the flawless ensemble with gobs of jewels and soft waves. How she managed to keep the news under wraps is still a mystery, but we can’t help but applaud her for singlehandedly stealing the show last night.  It was either Beyoncé parading her new bundle of joy or listening to more of Jo Calderone’s on-stage banter…

Video of the year: Katy Perry, “Firework”

Best video with a message: Lady Gaga, “Born This Way”

Best editing: Adele, “Rolling In The Deep”

Best cinematography: Adele, “Rolling In The Deep”

Best direction: Adele, “Rolling In The Deep”