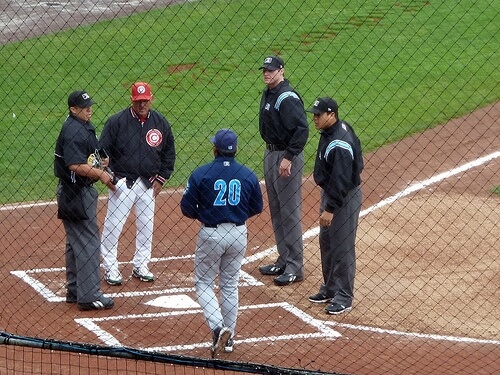 Meals, a 14-year veteran MLB umpire, made an atrocious call at home plate to give Atlanta a 4-3 win 19-inning marathon game against Pittsburgh in the wee hours of last Wednesday.

It was so horrid, it caused all hell to break loose amongst fans and media in a manner similar to, but not exactly like, the Jim Joyce-Armando Galarraga perfect game debacle last summer.

Everyone who had the benefit of a second look (and, let’s be honest, a first look) knew Julio Lugo was out. But Meals, who later admitted he got the call wrong, didn’t have that luxury, so the call stood as he thought he saw it. Oh well, Buccos.

Poor umpiring has long been a part of the game – I like to think that when the New York Nine and the New York Knickerbockers met in Hoboken, N.J., on June 19, 1846 to play the first game of baseball, there was at least one manager-umpire dirt kicking display – and to err is human, as we all know. But enough is enough.

These mistakes don’t happen in other sports because replay is available. I’m as much a purist as anyone when it comes to baseball, but the truth is undeniable now. If we can correctly award possession in football, we should be able to get safe or out right at home. Especially when MLB makes its officials speak to media members. It’s callous to not give umpires the tools to make their accuracy better and then throw them to the wolves when they screw up.

Balls and strikes shouldn’t be up for review. Nor should fair or foul balls. But everything at home plate and the other bases, when appropriate, should be as reviewable as home runs currently are now

As much as baseball doesn’t want to get with the 21st century – and their YouTube policy is proof enough on that front – it has no choice now. Fans are smarter. Media is smarter. Television cameras have more angles and more opportunities to make hindsight not only 20/20 but better. Umpires are out there on an island, and it isn’t right. The time has come to be fair to the men entrusted to keep the game so.

Previous Post:Blast From the Past: 80s Playlist
Next Post:Universities to Provide Surrounding Towns with High-Speed Internet