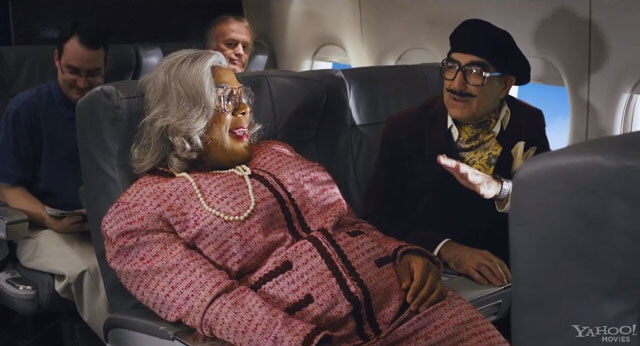 The seventh installment of Tyler’s Perry’s illustrious Madea franchise, Madea’s Witness Protection, has just hit theaters, and 17-year-old Danielle Campbell made her debut with the film series as ill-tempered teen Cindy.  Campbell plays the unruly daughter of a man (Eugene Levy) too swamped in family brouhaha to recognize that he has been set up and is in the center of a Ponzi scheme (you may have a hard time recognizing him as any other than “Jim’s dad” in American Pie, though we assure you – Campbell is way cuter than Jason Biggs).

The rising star chatted with us about her career, her role in the film and her dream gig.

CM: So you were discovered as an actress at a hair salon in Chicago. Could you tell me a little bit about that?

DC: I was just hanging with my mom having a girls’ day and somebody spotted me. I met with the agency and it just all sort of happened from there. I was like 10 years old I think…

CM: Did you ever want to go into acting before that?

DC: I never really thought of it. When I was young I really wanted to be a spy (laughs). But then I just really sort of fell into acting and now I absolutely love it. If I weren’t acting though, I’d like to do journalism I think. That sounds like a lot of fun.

CM: Can you talk a little bit about your role in Madea’s Witness Protection. What’s your character Cindy like?

DC: She’s really the brat of the family and she dislikes the stepmom. She can be really difficult sometimes. I loved playing the character, but I just hope I’m not anything like her in real life.

DC: It was just amazing. I’ve watched them all in films growing up and it was just completely unreal to work with them.

DC: I would really want to be in the Fast and the Furious series. I loved the movies and I would absolutely love to work with Paul Walker. That would just be incredible. He’s a great actor, and he’s totally my celebrity crush!

When you’re not acting, what do you like to do for fun?

Previous Post:The Extinction of the Entry-Level Job
Next Post:Anderson Cooper: Out of the Closet