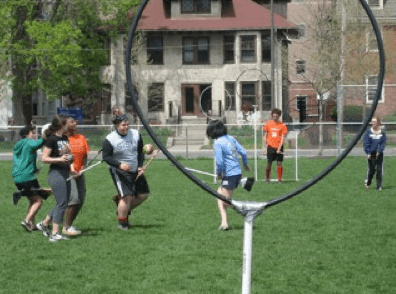 The Latest Chapter in Quidditch Through The Ages

Forget about Gryffindors and Slytherins; if you want to see a real Quidditch match, look no further than a soccer field near you. Adapted from the favorite magical sport of Harry Potter, this very real game is gaining popularity with Muggle college students across the country.

“I must admit that I thought it would fail miserably,” said Alex Benepe, founder of the Middlebury College team. Now, the Intercollegiate Quidditch Association, started and commissioned by Benepe, proudly boasts teams from more than 200 colleges across the country. The first Intercollegiate World Cup, between Middlebury and Vassar College, took place in 2007. Now the championship is played every December, following a grueling round of playoffs between teams divided into five regions.

To the world beyond platform nine-and-three-quarters, a Muggle playing the often days long enchanted game is laughable. But students have adapted the magical sport to fit their world. Just like the novels, seven players from each team are on the field: three chasers, two beaters, one keeper and one seeker. Instead of chasing the flying Golden Snitch, seekers chase a student with a tennis ball in a sock tucked in his pants through campus, often following him off the field, into a random building then through a classroom before reaching him. “Having a human snitch and keeping the brooms in [between our legs] keeps up a humorous, highly entertaining element,” explained Benepe.

The Potter-inspired game hasn’t always been as popular as it is at Hogwarts. “At our first meeting, we had one girl show,” said Aimee Howarth, a Texas A&M senior. Now, their team boasts over 100 members, and hosted a Yule ball last year that attracted more than 600 students. Syracuse plays “Sandlot-style pick up games,” said sophomore Drew Shields. “It’s competitive, but never serious, fierce but always fun.”

Shields describes the game as a combination of basketball, soccer, dodgeball and tag, which is why the sport attracts more than just Potter fanatics. “I have never read the books, and I’ve always maintained that the films are mediocre,” said Shields. “This isn’t a HP nerd club. It’s plain and simple: a great, fun sport.”

Previous Post:King of the Bakery: Duff Goldman Reigns in Ace of Cakes
Next Post:MTV’s The Buried Life: What’s on Your List?