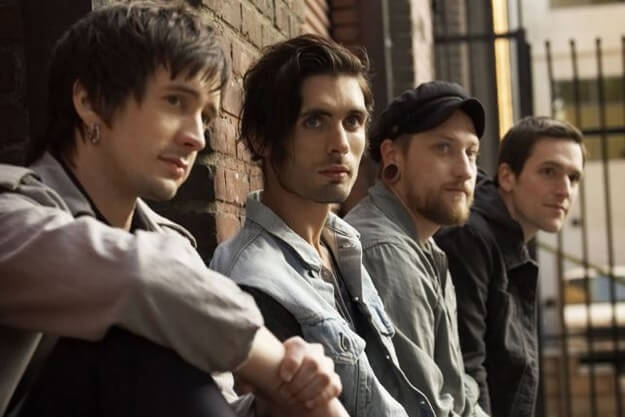 Josh AxelrodMar 29, 2012
Home » Latest Posts » CM Interviews THE ALL AMERICAN REJECTS’ Mike Kennerty
FacebookTweet
It must be nice to be in your 30s and still rocking just as hard as you did when you were a teenager. The All American Rejects have been doing their thing since 1999 and have yet to show any signs of slowing down.
The band from Stillwater, Oklahoma won our hearts with “Swing, Swing” in 2002 and continued churning out hits throughout the 2000s. You’d be lying if you denied ever jamming out to “Move Along“ or “Dirty Little Secret.” I will proudly admit that I got really, really excited when they covered “Give You Hell” on Glee.
Now they’re back with their fourth album, Kids in the Street, and it’s clear the boys are still just as introspective and pop-punky as ever. Rhythm guitarist Mike Kennerty talked to CM about the new album and life as an All American Reject.

After four albums and over a decade of experience, it’s safe to say that Kennerty and the Rejects have earned the title of veterans of the music industry. Is that how they see it?
“There’s a little bit of us feeling like we know how things work,” said the 32-year-old musician from Houston, Texas. “We learned the hard way that to do [something] right you have to do it yourself.”
This approach to music making has clearly paid dividends for the band. Considering the Rejects have “always been a band that takes our time,” this veteran mentality can only mean we’re in for a treat on the new album.
“We stumbled upon making a record that I think is our best,” said Kennerty. “We decided to embrace the vibe and record our songs live.”
Wait a second…recording songs for an album live? Is that a thing?
“We set up in a room, worked it out, and just played our asses off,” explained Kennerty. “It was nerve-racking as hell it was fun. The record is very moody and like a long, flowing journey.”

Kennerty said that Kids in the Street takes the Rejects back to a simpler time, when they were just a bunch of rowdy teenagers.

Find schools
“We definitely had a very rambunctious period when we were kids,” Kennerty admitted. “Traveling on dirt roads in Oklahoma just being sh*theads.”
A lot of the music is apparently based on the fact that the Rejects’ childhood was cut short when their careers blew up. That’s where the “long, flowing journey” part comes into play.
“A lot of the record explores how when we came off touring form the last album we realized we’ve been doing this now our entire adult lives,” said Kennerty. “We had no lives at home. Tyson [Ritter, lead singer] set out to find himself. Lots of partying and bad women, reckless behavior. But it led to lots of reflection and looking back at our lives.”
That reflection has created an album full of angst, like the moody “Heartbeat Slowing Down” that contains lyrics like, “I fucking hate this town/ I wanna burn it down/ I never felt so cold.” The whole song isn’t that angry, but it’s one of the more intense songs an album that’s equal parts pop-punk and hard rock.
“It has two very distinct sides to it,” said Kennerty, who called rock his “bread and butter” and said it’s lonely being a rock band in the age of pop dominance. “Some songs are true rock songs while others fall more on the pop side. They marry each other really well though.”

Clearly, Kennerty is proud of the band’s work on Kids in the Street. Now that the album’s out, he’s looking forward to hitting the road again with the boys.
“We haven’t really toured in almost two years,” said Kennerty, clearly excited. “We’re very much looking forward to getting back on the road and getting back to normal.”
I wonder how many other people can call a nationwide tour “normal.” How can aspiring rock bands get to that point?
“It’s just a matter of doing it well,” said Kennerty, who knows a thing or two about making hit music. “Bands tend to focus on non-musical things too much. Concentrate on the music first and foremost. We’ve probably hindered ourselves because we don’t work much on our image. But at the end of the day people want good music.”
Ritter made a comment about the album’s quality and the tour that struck me as odd: “"If you want to see this band at their best, and probably the best they'll ever be and hear all the songs you want to hear and all the songs you haven't heard yet then you should make it a point to come out.”
Is it really wise to admit that you’ve hit your creative ceiling by saying the Rejects are “probably the best they’ll ever be?” Kennerty did his best to clarify what he believed his bandmate was trying to say:
“There are a lot of bands who kind of quit trying. We’ve never fallen into that. We still have the passion and fight. I know that we won’t half ass it ever. I’m sure he wasn’t trying to say we can’t top ourselves. We’ll try, hopefully we can.”
That’s why I respect the Rejects so much: their drive and love of what they do hasn’t diminished at all in over a decade of making music. Rock on Rejects. Rock on.
FacebookTweet
Celebrity Advice Life

Previous Post:Mascot Madness: A Cinderella from Detroit
Next Post:Copenhagen 2012: I Miss You Bloomington