You are here: Home / Life / Keep College Close but Your Family Closer

I expected college to be a huge change. I would return home a different person after experiencing new things and growing out of my safe bubble. That turned out to be true, but I never expected everything at home to be so different too. I had this insane idea that while I was gone, nothing would change back home. My first time driving to the University of Florida, I remember glancing back at my house and thinking I didn’t really have to look back—it’s not like the driveway or front door would change while I was away. I mean, I was only leaving for two months.

And I was right–nothing changed in the first few months of me being away from home. I called every now and then to catch up, but I never really made those calls a priority; I was too busy going to class and meeting new people. I assumed that while I would change, my family and life at home would remain exactly the same. But you know what they say about assuming—and I learned the hard way.

The spring semester of my sophomore year, I received a phone call from my dad asking for my cousin Josh’s phone number. I thought nothing of the call. I gave my dad the number and continued working. Later that evening, I wondered why my dad needed his number, so I called Josh. He told me his mom—my aunt and godmother—had been in the hospital. But Josh didn’t tell me enough, so I called my dad and hoped he’d explain more.

I did as much as possible while at home. I made sure my cousins ate, got my grandmother a comfortable chair, brushed my aunt’s hair and painted her nails. I didn’t think this would last long. My aunt would get better quickly and everything would go back to normal. But the waiting and the fear continued for months.

Once I was back at school, I started hating college. I returned to classes, worked just as hard and pretended like nothing was wrong. But I felt like teachers were targeting me by piling on coursework and stupid assignments—didn’t they realize I didn’t have time for this? School became an imposition. I tried to get away as fast as possible to make it back home. Someone I loved was dying, and I couldn’t hold her hand.

I spent my spring break that year sleeping in my aunt’s hospital room. I looked around at the red tubes on white walls thinking this shouldn’t have happened. She should be better. Prayer blankets covered her feet while rosaries and angel statues littered the room. I remember seeing faith in my mom’s eyes and desperation in my grandmother’s. Despite hopes and prayers, nothing worked. I went back to school filled with anger and fear wondering when this pain would end. As I got on a bus to return home after two weeks, my mom called. “She’s gone.”

I fought the sobs that worked their way up my throat for the next several hours. I threw up because the stress ate me alive. I couldn’t sleep because my head was filled with nightmares. I pulled the covers over my head and held a blanket to my face so my roommate wouldn’t hear me crying.

I felt nothing for the rest of the semester. I couldn’t focus on work or lectures. I lost any ambition to do well. I wanted to forget everything because at least then I wouldn’t have this black hole obliterating my insides.

When my grades came back, I realized my aunt would be disappointed in me for giving up. I looked back and thought of all the things I did wrong or that I could’ve done better. Looking back helps you grow. Reminiscing forces you to face your mistakes. I distanced myself from my family when I left for college thinking they’d never change. I missed the small changes. I missed my little brothers’ voices breaking and my mom getting a new job. The little things, which never seemed like much, made me realize I kept my family out of focus. I lost opportunities I could’ve had with my aunt to make sure she knew I loved her.

While the pain of her death never completely leaves me, I know I have to learn from my mistakes and make her proud. College and the ultimate drive to be more was something my aunt always deemed necessary. While school proves stressful, and you should dedicate your time to being better than you were, don’t forget about those who helped you get there. 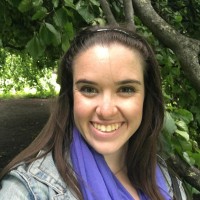 Let’s Have the Conversation: Disordered Eating in College
Next Post: Learn How to Brand Yourself with Professor Scott Talan