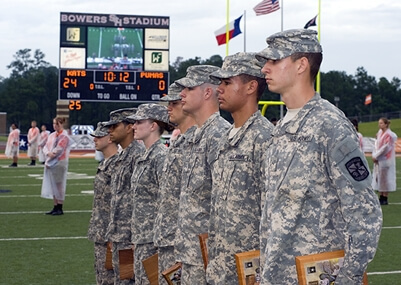 On many college campuses across the country the Reserve Officers' Training Corps,  or ROTC, is present. On training days, the students involved with ROTC programs can be spotted walking through the quad dressed in their military gear. However, for the last 40 years, there has been a group of schools (the most prominent in the country, actually) that have withheld a ban prohibiting ROTC programs on their campuses…the Ivy League.

Many of the schools that most students only dream of attending have been off-limits to those young adults hoping to serve our country post-graduation. Luckily, this year Yale, Harvard and Columbia all signed agreements to reinstate ROTC programs on their campuses next fall. The programs, in which students received scholarship money in “return for agreeing to military service after graduation,” make their way back to these prestigious campuses following a monumental repeal of the “don’t ask, don’t tell policy” the prevented gay and lesbian servicemen and women from openly serving in the military.

While the programs are not expected to have high enlistment rates, there is not expected to be any opposition from other students once the programs get started. Even though some schools – Brown University, for example – feel as though the ROTC has “no place in a liberal arts college,” the schools that have decided to “revive” the programs feel as though this is an important decision not only for them but for the armed services; many of them produced some of the country’s most decorated officers and commanders. It is an additional way for students interested in a career of national leadership.

Students who actively participate, or hope to participate, in these programs, feel as though this will bring them a renewed sense of national and school pride while feeling more accepted and “at-home” on their campuses.