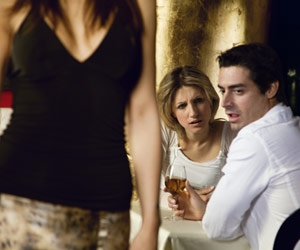 Is He Worth My Time?

I've started seeing this guy and we've been hooking up. He's telling me how much he likes me and wants to see where things go with us but he is always liking pictures of girls on facebook and instagram (especially boob pictures) even after he told me he wants to see where things go with us. He seems like a total man whore with his social media. Am I being paranoid or is he trying to play the field and keep me on the back burner?

Independent attractive female who doesn't want to waste her time.

When you mix technology with dating, it often results in disaster. This arises from our attempt to interpret everything a person does with technology. We try to figure out what short text messages mean, even though they may have been quickly composed without much thought. We try to understand why someone would "like" a picture of another attractive person on Facebook, even if there's no romantic attraction. We are constantly trying to create meaning where there is none and begin to weave stories that, while they could be true, are often false.

Here you are, getting every positive signal from this guy: he's telling you he likes you, and he wants to develop the relationship to see where things go. Yet you're skeptical because he's liking pictures of other girls on social media sites.

You're concerned that he's promiscuous and think that he may be playing you. While this could be true, think about it: if he was trying to take advantage of you and be with many women at once, do you really think he'd be dumb enough to "like" pictures of boobs on a site he knows you can see?

Maybe he's an idiot…or maybe he just isn't thinking about it. You have to remember: men often aren't thinking about these kinds of things as much as women are. He's seeing a picture of boobs, is getting turned on, and is "liking" the picture. It doesn't mean he's not interested in you…if anything, it means he really wants to be sexually active with a girl but has to settle for Instagram. If he's the "man whore" you think he is, he wouldn't need Instagram to be looking at boobs.

Calm down, take a deep breath and don’t judge his personality from his thoughtless actions on Instagram. Pursue the relationship and see where things go. Don't create unnecessary barriers – if this really bothers you, be a little cautious as you develop a relationship with him. Don't shy away from him until you have a legitimate reason to do so.

–Do I Commit to Scared of Commitment? 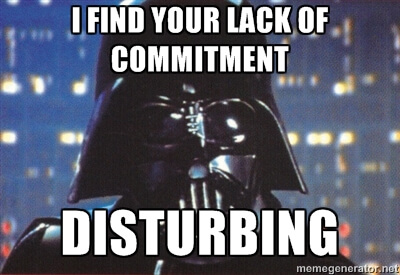 You shouldn't keep hooking up with him if you want more than he's willing to give. You're walking into an emotional trap, and you may end up coming out of it with a lot of emotional damage.

I actually did this once – there was a guy I was "dating," although he wouldn't call it that, and he was afraid to commit. He wanted to only be friends with benefits, although I eventually pressured him into labeling it as exclusive dating. Do you know what happened? I got emotionally attached to him, and two months later he ended things after I had pressured him to enter into a relationship.

When you look for a partner, you're searching for someone who is compatible with you. This compatibility isn't just about opinions, looks or personality – it's also about values. Right now, he can't value commitment. We could try to psychoanalyze the situation and figure out the interesting reason for his indecision – I did that with my guy, and he had been cheated on multiple times in the past.

But I did that because I want to be a psychologist, so I figured I'd get some practice with him. You, on the other hand, have no responsibility to figure out why he has commitment issues. Even if you do understand the underlying reason, it's not going to fix the situation.

You're wasting your time if you think that hooking up with him may lead to something more. If you try to ignore what you really want, and continue the friends with benefits relationship, it's going to be hard and unsatisfying. Lose the guy while you're still not extremely attached to him, and find someone who's worth your time.

Anonymously ask Noah your own hookup/dating/sex/relationship question below and you might find your answer in next week's column.