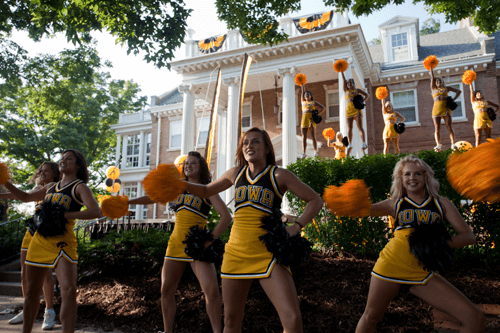 Forget the standard library tour and residence hall meetings, Welcome Week at these Big Ten and Ivy League universities go above and beyond.

President Sally Mason invites new Hawkeyes to her own President’s Block Party to mingle with fellow classmates before the fall semester.  Students, administrators and coaches crowd Church Street wearing black and yellow to kick off the first week of classes.  “It’s a good way to kick off the year by relaxing before classes start and you can hang out with our president Sally Mason.  How many other schools get to do that?” Iowa junior Ryan Fessler commented.  There’s free food and entertainment. Plus, students learn how to chant like a Hawkeye to the University of Iowa Fight Song with a little help from the Iowa Spirit Squad and Marching Band.

Students create miracles during orientation through BuckeyeThon. It’s a sponsor to the Miracle Miles 5k in which students raise over $222,000 for the Nationwide Children’s Hospital.  Although the race began with modest participation, new students continue to increase the popularity of the 5k each year. “The atmosphere is just an overall positive and hopeful event, as we are all there for a good cause, to raise money.  The more money we raise, the more miracles we can provide,” said Miracle Miles event coordinator Kortney Pifher.

Freshmen at Cornell University conquer fears, meet fellow classmates and challenge their climbing skills on the Lindseth Climbing Wall during Orientation Week. Lindseth holds the title as the highest climbing wall in North America boasting 4,800 square feet of climbing surface as well as a range of courses for the novice and advanced climbers.