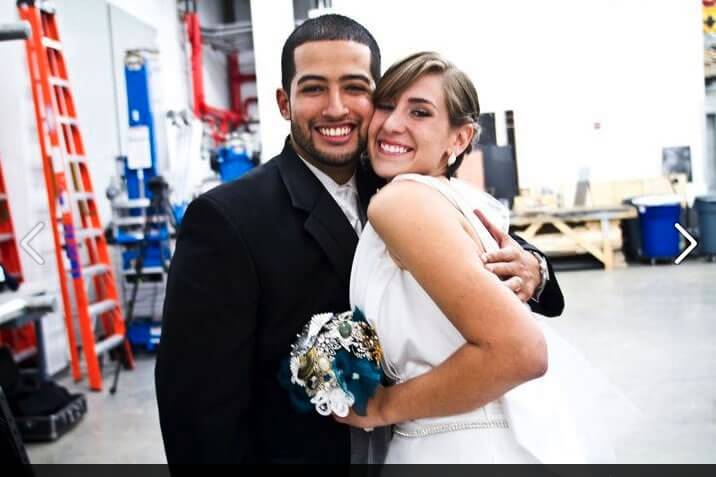 It’s no secret that relationships are a lot of work. Not only are they overwhelming by themselves, but mix in school, work, internships, friends, family, a social life, and you’ve pretty much hit your limit.Most of us are so tied up in our college student lives, we can barely imagine taking on a full-time relationship, let alone handle the idea of getting married someday. But if you ask 21-year-old Amanda Vazquez, a current student at Florida International University, she’ll tell you that getting married was one of the best decisions she has ever made.

Formally known as Amanda Gonzalez, Vazquez and her husband Zak, 24, tied the knot just one week after her 21st birthday in January of this year. Some people go to Las Vegas for their 21st birthdays, others get married – to each his own, I say.

So if she’s getting married at 21-years-old, these two lovebirds must have dated for years, right? Wrong.

“Technically, we only dated for about three months before we got engaged and then had a two month engagement,” says Amanda. But don’t worry, there’s more to it than that. Amanda has known Zak since childhood; they grew up together. During their middle school years, Amanda saw Zak as more of a “big brother” than a boyfriend. It wasn’t until college that Zak felt something more than just friendship towards Amanda.

“During college, he wanted to pursue a relationship, but I was very hesitant,” shares Amanda. “For a long time I resisted a relationship with him out of fear and uncertainty of my feelings. He was invested in this relationship way before I was…and for three years he loved me faithfully without receiving any love back.”

But love has a way of winning in the end, my friends; some call it fate, others like Vazquez attribute it to God’s work.

“After praying about it and giving all my fears and uncertainties to the Lord, I took the plunge into marriage…and there’s no looking back,” she says.

After all this, is Amanda now an advocate for young marriages? Absolutely not! With a big no, Amanda comments on how “our generation in particular is not in the right mindset at twenty-something to be married.” And she’s probably right; we’ve only been around for about two decades. That isn’t even enough time to sort out priorities for most of us, let alone choose a life partner. The drive to get a career right after graduation, the fear of long-term commitments, and the increase of divorce rates are enough to scare a kid away from marriage for quite some time.

According to Vazquez, married life is pure bliss, but she wouldn’t suggest it to any of her peers at the moment. “It really depends on the person, but in general, no, I wouldn’t recommend it to other people my age. I’ve always desired that stay-at-home mom life, with all the cooking and cleaning and little things that it entails,” she says. “The balance between that and school can get tough, but I’ve made up my mind that my role as a wife is more important than my role as a student.” Not to worry, though, because Amanda excels in her schoolwork – she finished her junior year with a 3.7 GPA.

“I feel like I had my ‘college experience’ while getting my Associates Degree at The Honors College at Miami Dade; now it’s time to tackle the role of college wife. “

Not many college students these days have marriage on their mind – in fact, it’s most likely the furthest thing from their thoughts – but every once in a while, you will cross two people who are so madly in love that school and everything else falls by the wayside.

“I don’t think I have more challenges than someone my age, just different challenges,” she says. She adds that marriage does come with more responsibility, but she’ll take the challenges of marriage over being single and dating any day. “I have a best friend who loves me and is committed to me, and I’ll take that over anything else.”

For Vazquez, marriage is one big blessing. “I feel extremely blessed to be married and in college. I have a husband with a stable job that allows me to be in school, and God has ordained for me this amazing time in my life.”

Previous Post:When YOLO Goes Wrong
Next Post:What’s Swimming in Your Favorite Pool…Besides You