If you’ve been bringing your A-game to work all day, every day and absolutely killing it, you deserve a raise. However, the initial asking tends to be the most nerve-wracking part of getting a raise, right? Fear not, because we found some serious hacks on how to ask for a raise without sounding rude AF.

Follow these tips and tricks on how to ask professionally, confidently and gracefully.

Set yourself up for success

First things first, don’t get ahead of yourself. Starting out at your first job is exciting but make sure that you can see yourself there for a long time before you think about asking for a raise. “Don’t ask for a raise straight out of the gate,” said Megan Gloss, features editor for the Telegraph Herald. “Establish yourself in the company first, and if you see ways you can benefit as a team player and stand out that sets you up for a better position to ask.” Get your ducks in a row.

Be ready to prove your point

In order to find some success in asking, look at the pay raise also as an opportunity for more responsibility or leadership within the company. And when you decide to ask, provide proof that you’ve been working your butt off.

If you’re continuously exceeding what is asked of you at work, your boss might consider giving you a raise if you ask. “A raise has to be contingent on going above and beyond, what you do on the day to day basis,” Gloss said. “And numbers speak very loudly, If you’ve made a lot of profit for your company, and you are constantly growing and being a team player, that sets you up to stand out, so when you do ask you have some leverage.” And as long as you have the proof to back up why you want a raise it won’t be a surprise.

Don’t act entitled when asking. Be confident, but not cocky. Having proof that you excel at your job will help exude that genuine confidence. Focus on what you’ve accomplished to make your case for why you believe you deserve the raise. “Graciousness is the biggest thing and proving why you’ve earned the raise rather than feeling entitled and ‘needing the raise,’” Gloss said. “There is a fine line between confidence and cockiness.” Acting self-centered won’t make them feel more inclined to give you the raise, so, be professional.

Of course, don’t expect a “yes” right off the bat. In fact, prepare to hear “no.” “If you do hear no, then take it gracefully. Don’t threaten to leave, you still want to be a team player,” Gloss said. “Attitude speaks volumes in these situations and you don’t want to burn bridges or ruin your own reputation.” Networking and staying in good standings with former co-workers and employers can only help in the long run.

Take advantage of an opening

Don’t sell yourself short either. If an opportunity for advancement comes around and you feel you should be considered, go for it. “Make sure you know your worth coming into the conversation. Have examples ready to prove what you’ve brought to the table that’s valuable to the company,” said Nikki Bauer, executive recruiter at Express Employment Professionals. Keep in mind, though, if you are a college kid, you have to climb the ladder like many others did. No matter how many internships or jobs you’ve had throughout college this is a typical starting point for everyone.

Be considerate and understanding

If you know the timing is off but you want the opportunity at some point, let your manager know. “Plan to have a conversation for later on and let them know what you want to work toward,” Bauer said. “A lot of it will reflect on how the business is doing financially or the time of year you’re asking.” Keep in mind that a rejection doesn’t mean you haven’t earned it, it might just be bad timing. So sidebar the conversation for a later date and revisit the promotion.

On the other hand, situations where you might get another, a better offer from a different company exist. In that scenario, it would be okay to use that as a little leverage to discuss a promotion at your current job. Just make sure you do it respectfully and without arrogance; you want to move up in the company, not get dumped.

Finding a balance between confidence and professionalism is key. “It’s a very fine line,” Bauer said. “If you’re sought after and the offer has a better salary or better benefits, meet with your boss and tell them what the scenario is,” she said. “It’s a hard conversation to have, but it’s one that has to happen for you to grow as a person and professionally.” Confrontation with tough conversations don’t need to be awkward, and the more professional you act about it the better the outcome.

If you’re going to leave, do it right

If they want to keep you they will counter and ask, “What do you need to stay here?” Again, it could also just not work in the budget for them. That’s a difficult scenario, but in that case if you do move forward taking the new job do it graciously and thank them for the opportunity. Leave on a good note. “Really understand the nature of how big your company is and make sure you aren’t bringing up the topic during a time of hardship,” said Judy Panagakos, senior career coach at Early Stage Careers. Be aware of the position your company is in at that time.

The biggest takeaway? Keep the conversation about you, your goals and what you can do for the company. “Having that conversation should definitely be just about you and your work, and not about everyone else. It shouldn’t be like keeping up with the Joneses,” Panagakos said. If you feel like you’ve provided outstanding talent and work for the company and feel deserving, don’t be afraid to have the conversation.

Filed Under: How to Ask for a Raise Jobs & Internships 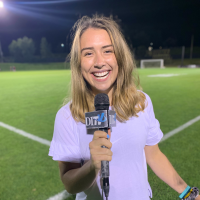 Maddie is a student at the University of Iowa majoring in Journalism and Sports Recreation Management. When she's not writing she's doing hot yoga, running, running to get iced coffee, or watching Netflix.

10 Best Ways to Celebrate a COVID-Safe Halloween
Next Post: Evacuating a Hurricane During the First Week of Class