You are here: Home / Life / Freshmen / How a Car Ride With Strangers Gave Me My Best Friends

In elementary school you made friends unintentionally. You liked the the girl sitting next to you with a purple notebook because purple was your favorite color. So you invited her over for a playdate the next day. Instant best friends.

Like second nature, your common interests gave you more friends than you needed and your small naïve mind befriended everyone. Middle school came your two-pony-tails weren’t socially cute anymore. The clique of girls at their exclusive lunch table laughed at you for it.

In high school you found your real friends, the people who liked you for you. They met up every Monday for girl’s night to watch The Bachelor. You loved those girls, and after 12 years of trying to find your “group”, college called, and you had to leave them.

Just like that, it was time to start over.

At a school placed in the middle of Pennsylvania and its miles of cornfields and blue skis, I squeezed into a small car with only four seats. There were five of us. Five complete strangers.

Breathing down my back, adjusting their unfamiliar bodies and quietly evaluating their surroundings, they sat to my left and right of me, making small talk to fill the unwanted awkward silence.

I was a freshman, smushed in the middle seat, filled with fear, excitement, fresh faces and a quiet voice yearning to be heard. My mind raced anxiously, searching for reasons in my head to convince myself that this was what I was supposed to do in college: meet new people and reinvent myself. More importantly, go out of my comfort zone.

We headed to Erie, Pennsylvania. The drive was going to feel long. Lily, the driver and president of THON organization planned to take us canning. “Alright lovies,” she said with an enthusiastic jump in her voice. “Is everyone here? Are you guys excited?”

Lily was one of the most positive people I’d ever met. Her straight blonde hair radiated sunlight and her bubbly personality talked to you like a friend from the past. I envied her ability to light up a room and make fresh faces like myself feel so included and welcomed. I want to be like her, I thought to myself.

“Everyone better be here or the claustrophobia in me is going to freak out,” said Alex as she gathered her headphones out of her yellow hipster purse. Her presence was intimidating but cool at the same time. Her big green eyes fixated on her iPhone; her thumb vigorously scrolled through her music playlists. Her thumb quickly stopped as if it knew exactly where to find the perfect song, and her foot began to tap. Lily started the small car’s engine and off we went.

We spent the drive talking about surprisingly interesting topics. Lily brought icebreaker cards with her. Mark, the six-foot-two quiet teddy bear in the front seat next to her, read them aloud.

“What’s the most embarrassing thing that ever happened to you?” he read slowly, emphasizing the word “you.”

There’s no way I would tell these strangers the time I did a whole presentation in front of my class wearing a blouse unbuttoned in a place it shouldn’t be unbuttoned and my skirt on backwards after quickly changing from gym class beforehand. A short story mouthful. Did I mention, no one told me until the teacher pulled me aside mid-speech? Yeah, no way I’m spilling that tea.

And so of course like all people do when they swear to themselves they won’t do “this or that,” I told them the whole story, exaggerations and all. The car boomed with laugher. My anxious thoughts flew out the window and I suddenly felt at home.

Mila, sitting to the left of me was also a freshman. She was short, sassy and incredibly sarcastic. Her witty remarks were absolutely hilarious, and I found myself not minding the middle seat anymore. As I laughed with her, I realized unique and down to earth people surrounded me. And I didn’t want this car ride to end.

My college fears revolved around meeting new unfamiliar faces. Of course, I wanted to meet new people, but I had no idea how to do so. My friends from home were unmatchable. They could make me burst out laughing for no reason. I told them my deepest secrets. And when I needed to get away from family, they became a safe haven.

Who was going to top them?

“What’s your favorite type of music?” the teddy bear in the front seat asked, as he read another ice breaker.

“Dudes,” Alex said as pulled her earbuds out of her ears. “Listen to this. Lily, give me the aux”.

The car began thumping with EDM music and we all soaked in the high-pitch beats, nodding our heads and tapping our feet. Then Lily put on her favorite genre of music, which wasn’t really a genre, but really a playlist of overplayed karaoke songs.

Whitney Houston came on and I saw Mark roll his eyes, only later to see him quietly mouthing the words to “I Wanna Dance with Somebody.” Each of us took turns playing our favorite artist and I quickly jumped to making them play John Mayer, my all-time favorite musician and singer.

We all had completely different music tastes. But still we all found ourselves singing the lyrics and jamming out to every song played.

Getting to know someone’s background, personality and interests felt like reading a new book and deciding if you liked it or not. I liked every one of the books in the small car and I wanted to keep reading them.

I wanted to know what their passions were, what their home life was like, why they came to Penn State. How fascinating it was to think that out of all the people at this school, the five of us, complete strangers, shared such a personal car ride at the same time, at the same place, with the same people.

Call it God or call it the universe working in mysterious ways, but I truly believe I was put in that car ride with those people for a reason. My timid freshman mindset was finally demolished. I was making new friends and enjoying every bit of it.

As the small car pulled up to a tiny humble house surrounded by cornfields and a starry black sky, there were only four seats, but five us. Five new friends. 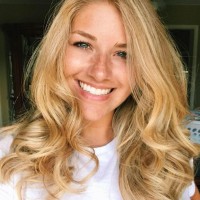 Tess is currently a sophomore at Penn State University studying Journalism. In her free time, she loves taking pictures, soaking up the sun or listening to anything John Mayer.

50 by 2050 September 2018 Newsletter
Next Post: I Didn’t Understand Why People Got Homesick