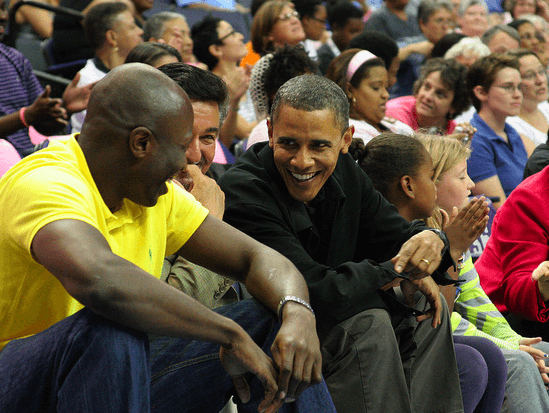 On a usual day, a politician must deal with mountains of paperwork and lots of legislative jargon.  On the other hand, the athlete’s world is filled with sweat and playbooks.

Yet, for some reason, many athletes have found themselves making a living after their career in sports in politics – as senators, governors and even president.

Carl Lewis, the famed track and field star who won ten Olympic medals in his career, recently attempted to run for the New Jersey Senate, but was unsuccessful in his attempt.

Here is a look at five former or current athletes who have recently accomplished a lot in their political careers.

The Filipino boxer who makes A-Rod moneyfor a few fights a year also serves as a congressman in his country’s House of Representatives.

In 2010, Pacquaio easily defeated his opponent for a congressional seat representing the Sarangani province.  The boxer originally created his own political party, known as the People’s Champ Movement, but has since moved on to the Liberal Party.

Kevin Johnson once was an NBA All-Star guard who could do this.  Now, he is the mayor of Sacramento.

Johnson has been in the new recently for stopping the Kings basketball franchise from bolting from Sacramento for Anaheim.

It was once a foregone conclusion that the Kings owners, the Maloof brothers, would move the franchise down the California strip.  However, thanks to fan support and Johnson’s ability to collect $10 million in sponsorship money from local businesses, the Kings will be in Sacramento for at least another year.  If Johnson can somehow figure out how to build a new stadium, the team could be in Sacramento for good.

Reggie Love played college basketball and football for the Duke Blue Devils between 2001 and 2005, but was not good enough at either sport to make a living professionally.

Somehow though, Love is now able to play ball with someone way more powerful than Dwight Howard or Shaq: President Obama.

Love is now a personal aide and close confidant to the president and the two regularly play basketball with one another.

When drafted by the Washington Redskins in 1994, quarterback Heath Shuler was supposed to be the answer to the teams woes.  Unfortunately for both Shuler and the Redskins, he turned out to be one of the biggest draft busts of all time.

But, at least the standout from the University of Tennessee has had a better career as congressman for North Carolina’s 11th district.  A socially conservative democrat, Shuler has been in the House of Representatives since 2007 and even challenged Nancy Pelosi last year to be the minority leader.

Only avid basketball fans might have recognized Dave Bing’s name immediately before he went into politics, but the former shooting guard and NBA Hall of Famer has garnered a lot of attention as he attempts to revamp the city of Detroit as mayor.

Bing, who played for the Detroit Pistons for most of his career, was elected into the mayoral office in 2009 after fallen mayor Kwame Kilpatrick resigned.  Now the basketball hero must become a political hero to get the city’s economy back on track.

Previous Post:Baseball Markets at Opposite Ends
Next Post:Fashion Trends at… the Job Interview