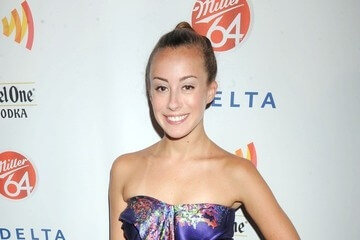 Thanks to Bravo’s new series Gallery Girls, I now know a thing or two about the merciless art industry in the Big Apple.  I’ve also discovered the living definition of hipster (see: Chantal Chadwick), but that’s beside the point.

The show began as a docu-series following seven 20-something ladies hoping to climb the art ladder in NYC, but it’s turning out to be a little less Work of Art and a little more Real Housewives.  For the majority of the season, the girls have handled business with quietly condescending glares and whispering red-stained lips. While the End of Century gals (Chadwick, Angela Pham, and Claudia Martinez Reardon) are busy drinking wine, failing miserably at paying their gallery's bills, and choosing the oddest articles of clothing in the world to wear, one girl is keeping it real and NOT letting art define her.

She’s Maggie Schaffer.  If you’ve watched the show for more than five minutes, you’ve probably labeled her as the “normal one.”  But even with her small town charm and chill attitude, she still can’t escape the drama.  Last week, fellow Gallery Girl Liz Margulies scorned Schaffer for getting a little rowdy with her boyfriend and his friends at a Miami club, claiming they were an embarrassment and disgusting “commoner creatures” (definitely adding that to my list of insults) for forgetting to tip (Schaffer seemed to laugh off Margulies’ catty comments, tweeting after the episode, “Now I REALLY can't wait for vacation on Thursday! Me and the commoner creatures are going on a surf trip to Puerto Rico!”).

While Schaffer has handled her newfound fame tastefully, she wishes she could say the same of Marguiles, who spent the majority of last week’s episode trash talking. “I felt like I made a conscious effort not to talk about or involve anyone that wasn’t on the show,” Schaffer said. “They don’t get to do interviews, they don’t get to do confessionals or show their side of the story … so when I saw that Liz said that, it was really a hurtful thing to see her talk that way about my boyfriend and his friends. They can’t defend themselves.”

They might not be able to defend themselves, but Schaffer won’t allow them to be helplessly attacked by Bravo’s latest rendition of the Mean Girls cast. “They went to college, they went to grad school, and Ryan [Schaffer’s boyfriend] went and got his Ph.D.,” she said. “They didn’t get to have crazy 20s, a crazy college experience, so they’re just living through that right now which is totally respectable and understandable.”

Everyone’s entitled to a crazy night every once and a while, and despite the Miami incident, Schaffer is working hard to make a name for herself in the art world.  She’s already got three prestigious internships under her belt (Cottelston Advisors, Christie’s New York and Eli Klein Fine Art, who approached her about doing the show) but even with names like that on her resume, paying art jobs are tough to land.  “That’s one of the things that surprised me the most after I graduated college,” Schaffer said. “I thought I was going to be able to get a job anywhere because of [the internships], and it was really a shock to learn that jobs do not come as easy as internships do.”

The season comes to an end tonight at 10p.m.  If you’re like me, you’re probably wondering what the show’s done for the Gallery Girls and their art careers. “I can’t really give up too much right now,” Schaffer said. “But I think if you watch the finale on [today], you’ll definitely get to see where [I am].”

As far as a second season goes, us Gallery Girls devotees are left hanging. “Hopefully there will be one,” she said.  “I would love to do a second season, but it’s still up in the air.”

Previous Post:How to Deal with a Class You Hate
Next Post:So Much to Do, So Little Time