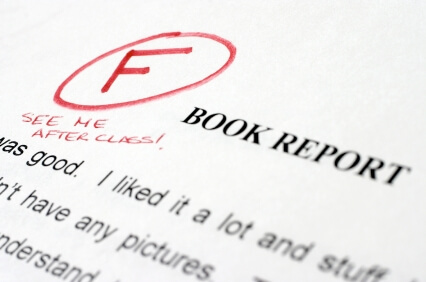 First Bad Grade: What Do I Do Next?

Nicole EisenbergOct 7, 2011
Home » Latest Posts » First Bad Grade: What Do I Do Next?
FacebookTweet

Although we would all like to think that we’re perfect in every way, there’s nothing like that first bad grade of the semester to pull our head out of the clouds, get our feet grounded and make us wonder how on Earth we are going to fix this. However, one bad grade will not ruin your GPA forever; you just need to work extra hard to handle the aftermath of this academic disaster.

Professors are people too; talk to them

Thomas Johnson*, a sophomore at Carleton College, received his first less-than-stellar grade in college on his second French test. He got a 63% because his birthday was the night before so he was out late celebrating and did not study as hard for this test as he did for the first one. Johnson’s first thought was, “I am going to fail out of French and then school and end up as the night manager at McDonalds.”

Fortunately for Johnson, he realized it was not too late, and he went to his professor’s office hours that week. To his surprise, his professor understood. “I guess I wasn’t the first freshman to ever take a test really hungover,” says Johnson. Nonetheless, his professor was very understanding and said that she would help him with whatever he needed. The duo met twice a week for the rest of the semester, and in the end, the bad exam only lowered Johnson’s final grade by 2%. Success.

Admittance is the first step to recovery

Milton Gholston, junior at Johns Hopkins University, had a trying experience with his physics class; very quickly, Gholston realized that this was going to be different than in high school where “less than a 90 was rare, and less than an 80 was unheard of.” For his second exam he says, “I saw it was out of 100.  Then I saw my score was a 28.” The bad news didn’t stop there—“Exam 3 comes around, and I get a 35. Woohoo!  Progress,” said Gholston. Unfortunately for him, this progress was not nearly enough.

Once Gholston admitted to himself that he needed help, he realized that there were many resources on campus that he had not used to his benefit. “There were daily physics help room options” in addition to the T.A.’s assistance. Gholston also began seeking help from classmates that understood the material and began doing his homework well in advance of the night it was due. With increased planning and his seeking of help, we are proud to announce that Gholston passed his Physics class.

Put in the time to avoid the crime

Ryan Anderson, sophomore at Rutgers, the State University of New Jersey, took a criminology class his first semester of college that got off to a rough start.   Thinking back to his high school classes, Anderson did not read the material for his first quiz and did not study at all. He remembers, “I went in to take the quiz and saw the questions.  I immediately though ‘uh-oh.’  I ended up getting [around] a 4 out of 13.” Anderson realized immediately that this was not good.  “Needless to say, I needed to study a lot more next time—but easier said than done.”

Unfortunately, it took Anderson a while to figure out the class and the teacher. On his next quiz he barely passed, but he “progressively learned how to properly study and ended up getting an 89 on the final.” Anderson now realizes that when he puts in the time to study, it pays off.  Cha-ching.

SO, when it comes to your first bad grade of the semester, just remember to talk to your professors, admit that you may need some help with the material and put in the real time to study.

Previous Post:How do you know if you’re addicted to sex?
Next Post:‘New Girl’ On The Block