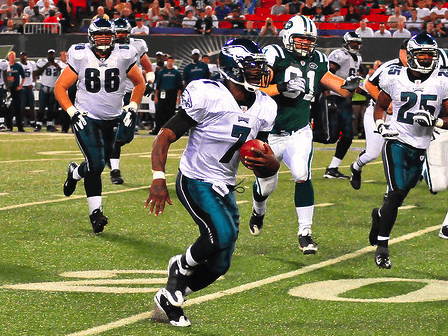 Professional athletes have a hard time staying away from the limelight. Whether it’s a great performance on the field or a slip up in their personal life fans are most likely going to be informed. So it comes as no surprise to see athletes getting dropped from their endorsement deals when their dirty laundry gets aired in a public forum. Although being convicted of a crime is a sure way to lose endorsements; many companies are willing to take the risk of signing a troubled star, such is the case for Eagles quarterback Michael Vick.

“Personally I’m against all of it,” said Trine University senior Mitch Plott. “You commit a crime it should be just like every other person that’s not a superstar; you don’t see those guys or girls going out after they’ve committed a crime making millions.”

Vick spent 18 months in federal prison after being convicted of running a dog fighting ring. The sentence started in December of 2007 and Vick lost all his endorsements and his contract was terminated. His losses were worth over a $100 million and he filed from chapter 11 bankruptcy. But since being reinstated back into the NFL in 2009 Vick has found success on the field. He was named the Associated Press and Sporting News Comeback Player of the Year in 2010 and was named to the pro-bowl.

Vick’s on-field success and star power was enough of a push for Unequal Technologies to take the risk of signing him to his first major endorsement since his prison release. The risk turned out to be a major reward for the company that designs football pads that Michael Vick wears. According to the companies Chief Executive Rob Vito the website had over 10 million hits within a day after signing Vick. He also said that sales went up 1,000% across the board. Some students such as Grand Valley State University junior Mike Henderson think Vick deserves a second chance.

“I’m actually surprised he got the new deal, but I think its okay,” Henderson said. “I believe in second chances. He got a second chance in the NFL, so he should be allowed to be re-endorsed. I think it just goes hand in hand.”

Unequal Technologies financial success with Vick didn’t go unnoticed as Cory Synergy a company that makes titanium-infused silicone wristbands also signed him to rep the brand with the likes of fellow NFL stars such as the Green Bay Packer AJ Hawk and the Pittsburgh Steelers Maurkice Pouncey.

When Vick went to prison over four years ago it didn’t seem that he would ever get right in the public eye again. He has definitely come on strong in the last two seasons and it appears that his professional career is back on track. All though he will never have the popularity he did when he was the highest paid player in the league he has reestablished himself as a star. Whether or not you’re a Vick fan it’s undeniable that he has the star power to sell; now it just comes down to who’s willing to take a chance endorsing him.

Previous Post:Hotel Safety for Summer Travelers
Next Post:No Change for the NFL