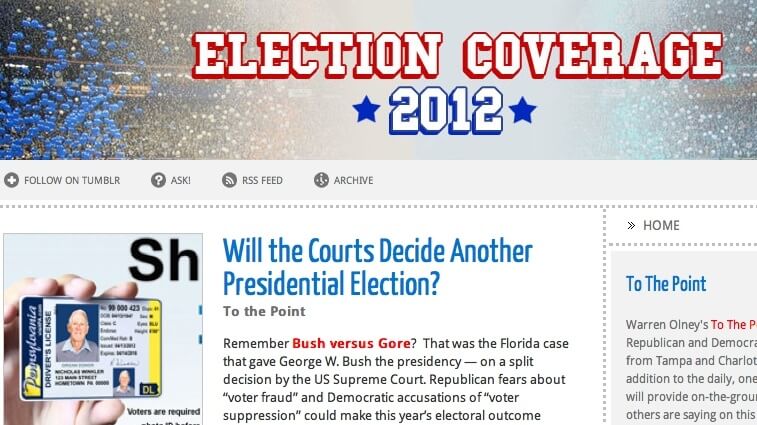 Confession: I’m no political wonk, and I’m a minor-leagues news junkie. My reality can’t always include reflective periods with The New York Times and penned reactions to Peggy Noonan’s editorials.

Even though that would be amazing.

But that’s not an excuse for remaining unaware and ill informed. Sorry I’m not sorry. Scrolling through three political tumblrs a day isn’t carefully reading the investigative reporting in The Washington Post, but it will keep you in-the-know, and it won’t overwhelm your already (this is what, week three?) overworked brain. Promise.

These are the three political tumblrs you need to actually know what you’re talking about. Check them out.

1)   Reuters Politics is the best place to start. It’s sophisticated, generally bipartisan, and largely objective coverage of the election. This blog highlights current events, political happenings, and the candidates’ responses, which is pretty important if you’re still an undecided voter. The photos are fantastic, and you can “Ask them anything” because they want you to get it. What a concept.

2)   The New Yorker makes the list for two reasons. First, it’s The New Yorker. On tumblr. Spark notes for the incredibly influential news magazine. My favorite part is the “political cartoon of the day/night.” It’s fun, witty, smart (obviously); it sums up that one thing people keep talking about this week. It posts succinct, readable versions of bigger stories; it never sacrifices insight. People. It’sThe New Yorker. Follow it.

3)   To The Point is just that. Right now, it’s focusing on election coverage. But it’s doing it our way, incorporating multi-media elements like video clips, photos, graphics, and SoundCloud segments. So it’s an interactive way to stay on top of things. To The Point tackles ideological issues like “The Mythology of the Middle Class” alongside “What Romney and Obama Fans Like.” Smart, interesting, balanced, and really worth viewing, hearing, reading. Bringing this election season back to basics for young voters- that’s the point (thankfully).