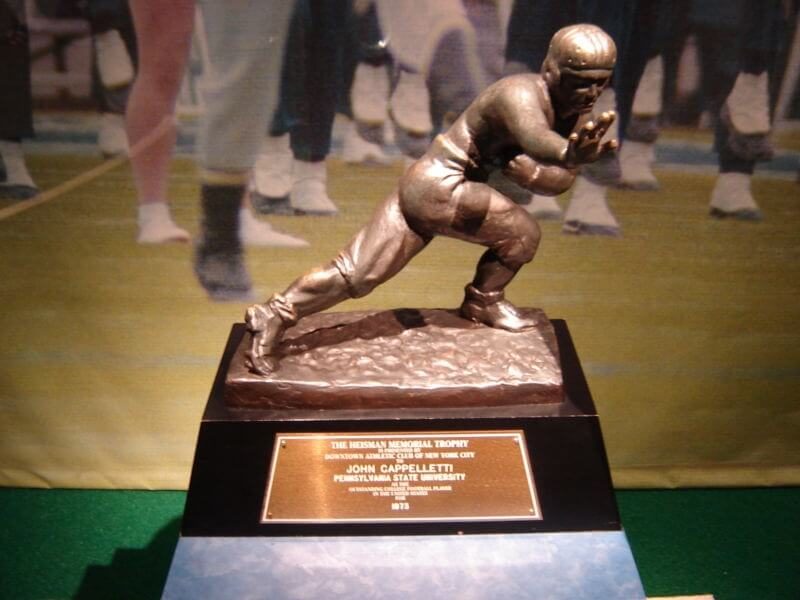 The Dash to the End Zone: The 2010 Heisman Trophy Race

In my book, it’s never too early to start Heisman Trophy talk. Sure, it’s all speculation and we’re two and a half months away from seeing these guys on the field, but it’s all in good fun.

We all know that defensive players rarely impress voters enough to be given the Heisman Trophy. Many are deserving of the award but are looked over because they just don’t show up on the score sheet. Is that fair to these kids? No, but it’s an unfortunate reality.
Star power is also critical for Heisman candidates. Players such as Boise State QB Kellen Moore produce big-time stats and win games, but due to a lack of quality opponents and Boise State’s existence in a small-market area and conference, he has no shot to win it.

Lastly, Heisman candidates almost always play on teams who are at the top of their conferences and are ranked in the Top 25. The voters take into account a player’s influence on his team’s ability to win games. But can’t the best football player in the country simply play on a team with a lack of other talent? Well, the Heisman Committee doesn’t see it that way.
Keeping those three things in mind, let’s take a look at just a handful of players that should be competing for the 2010 Heisman Trophy. Here are five candidates that I believe have a good shot to compete for the Heisman, as well as two other fans’ opinions.
Jake Locker (QB Washington) – Following the NFL Draft this April, Mel Kiper predicted that Locker would be the first overall pick in the 2011 Draft. While that is a lot to live up to going into this season, Locker already was expected to continue to improve and help Washington compete for a trip to the Rose Bowl. Locker plays in a pro-style offense that won’t help him put up gaudy statistics like he would if he played in a spread offense, but he is the consensus best college quarterback in the country. If Locker continues to improve his decision-making, he could almost single-handedly turn the Huskies into a contender. If Washington is winning games, Locker will be basking in the praise and the success and he’ll be in the Heisman race without a doubt.
Ryan Mallett (QB Arkansas) – Mallett, the Michigan transfer, had a very good season with the Razorbacks last year. His 6’7” frame allows him to stand strong in the pocket, see the field and make crisp throws to his receivers. With a good season, Mallett can also put himself in position to be a top draft choice. Scouts literally drool over his arm strength. If Arkansas can come out of a ridiculously deep SEC with 10 wins, Mallett will be in the Heisman running.
Mark Ingram (RB Alabama) – The 2009 Heisman Trophy winner will try to repeat during his 2010 campaign with an Alabama team that has retained all of its potency. However, back-to-back Heisman winners are a little hard to come by these days. My inclusion of Ingram on this list is more a result of formality due to the Tide’s talent-level and the fact that Ingram is still the best running back in the country. It is also worth noting that Ingram’s backfield running mate, Trent Richardson, may also be one of the best running backs in the league and if Ingram goes down, Richardson may be in the Heisman race.
Dion Lewis (RB Pittsburgh) – In his freshmen campaign last year, Lewis rushed for 17 touchdowns and 1800 yards with 5.5 yards per carry. Any running back would love to put up those numbers, and Lewis did it during his true freshmen season. This year, Lewis looks to continue to come up big for the Panthers, and if they finish as the best team in the Big East, Lewis may be in the thick of the Heisman race. Even though QB Bill Stull is gone, Pittsburgh’s offense shouldn’t miss a beat with sophomore Tino Sunseri looking strong during the Spring.
Jonathan Baldwin (WR Pittsburgh) – The second of two extremely talented Panthers, Baldwin should emerge as one of the best wide receivers in college football. You may not have heard much about him yet, but you will. As a sophomore last season, Baldwin quietly made 57 receptions for 1100 yards and 8 touchdowns. At 6’5” 225 pounds, Baldwin is an ideal deep threat and a superb redzone target. Think Braylon Edwards at Michigan (when he actually made catches). Once again, if Baldwin improves upon those numbers and Pittsburgh gets 10 or 11 wins, his name should be in the running for the Heisman Trophy.
(Adam Schulz):
Jacquizz Rodgers (RB Oregon State) – “Rodgers possesses excellent vision and has a very low center of gravity that gives him supreme balance. Rodgers does not need a lot of room to squeeze through running lanes, and when he does have space, he’s an immense threat to score. His ability to create in open space and elude defenders reminds me of Lionel Messi’s soccer skills.”
(Mike Vorel):

Find schools
Terrelle Pryor (QB Ohio State) – “Pryor is a serious contender to win the Heisman Trophy because he has unrivaled raw talent. He has speed that is rarely seen in the Big Ten that makes him a threat in multiple ways. That speed keeps defense honest because he can hurt you with his legs just as much as his arm. However, the skill that will really vault Pryor to the next level will be his progression as a pocket-passer. He finally has a firm grasp of the Buckeyes’ offense and has developed into a strong pro-style quarterback.”
FacebookTweet
Life

Previous Post:Going Digital: iPads for Incoming Freshmen
Next Post:Red, White, and One Crazy Night: Where to Celebrate Our Independence from the Redcoats