We've seen the East and South regions of the bracket. Today, we unveiled the North. Is this where we find our champ? Our Cinderella? Check back tomorrow as we complete the opening round when we reveal the West region.

LaMotta’s story in Raging Bull is incredibly depressing. But he is a bonafide crazy person, and a very memorable crazy person at that. As a general rule of thumb, I don’t mess with crazies, and Weston won’t give him any trouble here. I do have a soft spot in my heart for Weston, who did manage to band together a misfit little-league soccer team and lead them to championship glory. Knowing how to win improves Weston’s chances and I think he’d be the type of 16-seed that would hang tough until about three minutes into the second half. A blowout would then ensue. LaMotta has a claim as one of the best sports movie characters ever, so a nerd that owns a vitamin shop certainly wouldn’t stop him in the first round. WIN: LaMotta
-Taylor Schwink

Marketed as a “funnier, hipper version” of the original classic, the Sandler version of The Longest Yard is actually just a mockery of the Burt Reynolds movie. This was a movie with cross-dressing cheerleaders, players teaching each other how to throw illegal elbows and use brass knuckles and wise-cracking jailbird heroes throwing the ball in groins, a pioneer of its time. When Sandler redid it, the things that made this movie special in the first place were second nature to the original stand-up comedian. What truly makes the difference here is the believability. Reynolds actually played college ball at Florida State. Sandler did not. Sandler is not even close in comparison to the athleticism of Reynolds and in a sports movie; that’s kind of crucial. WIN: Paul Crewe (Reynolds)
-Ashley Melfi 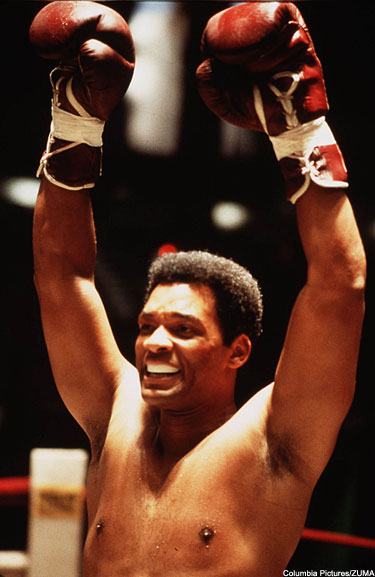 The Muhammad Ali-Lester “Worm” Murphy matchup is definitely a clash of underrated sports movie characters. Ali, played by Will Smith, is often overlooked. But Ali is the greatest athlete of all time, and his reputation is only elevated with his cockiness and success in the ring. Worm gets viewed as the bad guy in Rounders, but consider this: if Worm never got out of jail and got into gambling debt, Mike McDermott (Matt Damon) would never have returned to the poker table and would have been stuck with that — let’s be honest — bitch of a girlfriend. It’s not the most convention of methods, but Worm drove the storyline. Still, though, you can’t compare a base-dealing rounder with The Greatest. WINNER: Ali
-Sam Spiegelman

At first, Jim Morris looks like someone that could upset Brooks. He stubbornly tries out for the big leagues after agreeing that he would do so if his team made the playoffs, and after uncertainty and adversity, fulfills his dream. But the story of the 1980 Olympic Games is too gut-wrenching and patriotic to turn down. Herb Brooks’ pregame speech did as much as a speech could do to inspire a bunch of college hockey players from Minnesota and Massachusetts to beat those evil Soviets, so a first round win is a must. It would be un-American if he lost anyway! WIN: Herb Brooks
-Nicholas Munson

Vince Papale is everything that Mark Wahlberg has ever wanted to be in his life. Down on the count but looking up, with girl that’s totally gets his blue collarness a lot more than his detached ex-wife, and a bartender. On the other hand, we have Charlie Sheen being Charlie Sheen, but also playing baseball. Wikipedia tells me that Sheen admitted to using steroids to prep for his role as “Wild Thing,” which is something that Papale would likely die before touching. Thus we have the hashtag, #winner. WIN: Vince Papale
-Lance Pauker

Even though Sidney Deane lost to a white man on his home court twice, he saw something in that man (Billy Hoyle) that no one else did: heart. Together, Deane and Hoyle won a 2-on-2 tournament, despite their constant bickering, and proved to be an unstoppable pair. Maguire, to me, only wrote a mission statement that doesn’t stack up to what Deane saw in a white man playing basketball. Deane also called out Hoyle is saying that “white men can’t jump.” He proved to be correct after Hoyle failed to dunk three times in a row. Thus we have our upset. WIN: Sidney Deane
-Dan Servodidio

This matchup pits drama versus comedy, football versus hockey. Reggie ‘Reg’ from Slapshot is a part of one of the funniest movies (not just sports movies) of all time. I wouldn’t go that far with Friday Night Lights, but it is a solid movie. And if it weren’t for Boobie Miles, Mike Winchell would probably be the most memorable character. But still, I have to give it to Reg. I respect his abilities as a player/coach too much, and, let’s face it, Slapshot is too funny. WIN: Reggie 'Reg'
-Danny Golden

Clifford Franklin is a diva wide receiver with bad hands,  aka Braylon Edwards. Herman Boone is a top five sports movie coach of all time. He helped mold a bunch of confused, angry and selfish boys into a group of motivated, determined and morally conscious young men. And he did so in the segregated South with more racism than barbeque restaurants. If Franklin was on Coach Boone’s team, he would make him run all 5,280 feet that are in a mile. Look for this one to be a blow out, and for Franklin to always remember the night he played the Titans. WIN: Herman Boone
-Joe Cipollone

Previous Post:Meet the Miami Marlins
Next Post:Are You Bad in Bed?