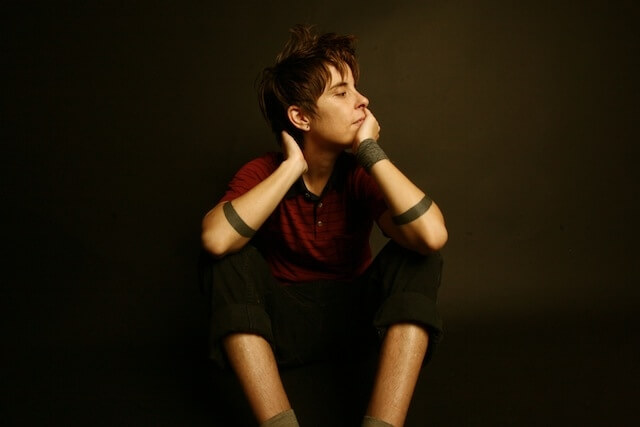 Andrea Gibson is a powerful poet and activist who uses spoken word and personal vulnerability to deconstruct gender norms, social structures, sexuality and social injustice. College Magazine had the incredible opportunity to talk with her about her poetry, life experiences and inspiration.

CM: How did you get involved in using poetry as a vehicle of change?

Let’s see, I moved from New Orleans to Boulder Colorado many years ago and I got involved in the activist community locally in Boulder and I heard about a poetry slam that was happening and I attended a poetry slam and it just felt like a hub of people that were creating art as a vehicle to inspire people towards action that would right things in the world and I really was taken with it. A couple of weeks later, I went to the poetry slam and I started performing and writing poems and from there I got involved with a group called ‘Vox Feminista’ which is a performance group of radical, political women who are using many different artistic realms—we did theatre, we used spoken word, we used dance, just various different realms of art to talk about various social injustice issues. When I was working with them I was working with women who were a lot older than I was and who had been doing great things for a long time and they sort of took me under their wing and started teaching me a lot of things and then from then my heart was sparked from that process of working with them and a lot of things that I was learning.

CM: What were your experiences like as a college student? Did you know at that age that you wanted to share your revolutionary and inspiring thoughts with the world?

Interestingly enough, I grew up in a really conservative, Christian home. And I grew up in a very small town where nearly everyone in town was Republican and then I left. I graduated high school considering myself a Republican and conservative and religious and I went to a Catholic college. And the only reason why I think I went to the Catholic College was because I played basketball and I got a scholarship. So I went to this Catholic College in Maine and my experience didn’t lessen in its conservativeness at that point. A lot of my teachers were monks and nuns and that’s how I spent my next three years. But at the same time, I think it was probably my sophomore year of college, I fell in love with a woman and I was 19 and something about that process of realizing I was queer made me question everything else in my life. So I started questioning my political views, my religious views, and everything I thought I believed and would believe for the rest of my life sort of got turned on its head. And then I was sort of the outcast at my little Catholic college; that was my experience with that.

I didn’t come out until another year. Well, I came out just to my close friends. It wasn’t until my senior year that I generally came out. I was literally the only person at my school who was queer and out. It was pretty difficult for me. It was also difficult because when I came out, my family […] lost touch and they didn’t respond to it well and I felt like everything in my life was shifting and changing a little bit too quickly for the ways my emotional body knew how to handle. But at the same time there was also this sort of excitement, you know. I felt really liberated and free in a way that I was really excited about the things I was learning about. I felt excited about being in love. I felt excited about this new world of possibilities that I hadn’t seen before.

CM: Did you know at that age that you wanted to share your revolutionary and inspiring thoughts with the world?

I was in school and I was studying creative writing and I had to do a book of poetry for my final manuscript for graduation. What was interesting was that I was never told that I could just sort of grow up and be a writer. We were told we could be teachers and write on the side or we can do a lot of other things but you can’t actually grow up and just be a poet. I never thought in terms of “That’s what I’m going to do.” I knew it was something I wanted to do; I didn’t know if it was something I could afford spending much time doing. But I was writing all the time and I never really pictured myself doing something for a living that wasn’t creative. I just couldn’t really wrap my head around the idea that I could possibly travel around and read poems especially for a living. I mean at that time I hadn’t even heard of spoken word. I think I heard Ani DiFranco read one spoken word piece on TV once and that was the extent of anything I had heard. I was really out of the loop with that. It was still a growing art form at that point; it still is but it’s different now than it was 10 years ago.

CM: Why do you think that poetry is so powerful in enacting change or at least demanding awareness?

Well, I think that especially with spoken word which is poetry spoken out loud on stage, it has an energy behind it that’s very emotional. And I think it requires a lot of emotional presence by the person speaking the poem. It’s also a conversation; it’s a conversation between the poet and the audience and the audience in a lot of ways sort of pulls the emotion and pulls the poem out of the poem and I think that when we’re creating art from an emotional place it’s really effective because I don’t think people typically respond and change things in their lives from facts. If you’re on stage and you start talking about the statistics of the number of deaths in Iraq, the numbers just reaches people’s heads. You’re gonna be more effective if you get up and honestly and  emotionally tell the story of one Iraqi mother and I think that people respond to emotion and to being touched in a way that I think spoken word has its whole life force with that. It’s all about emotion. It is all about intertwining emotion with the art. Not that other art forms aren’t, I think that specifically a person gets up on stage and says I want to touch somebody. I think that the way the spoken word movement has developed, a lot of the folks involved with it are really politically oriented and they’re talking about current issues that are really charged and I think that’s sort of permeating their culture a little more.

CM: Your poetry is powerful, personal and charged with brutal truths of the world. What keeps you hopeful?

A long time ago, I heard a quote by somebody and I still don’t know who said it. The quote is “Art has two responsibilities: one is to tell the truth and one is to create hope; both are equally important.” And I’ve often wondered if when I’m speaking a poem that seems brutal, or harsh or really depressing, I ask myself, where is the hope in this? What I’ve come to with that is that I trust people’s hearts and I trust their intentions and I trust that when people know the truth, they will make the right decision. I think one of the saddest things in my cultures, we’re just not told the truth by the government, the media, whoever. It’s hopeful for me that just the telling of the truth no matter what it is, no matter how sad it is will create an effect or change. So the thing I love about being involved in this movement is that I feel like it’s a whole lot of people telling the truth and that just generally gives me hope.

CM: Do you feel vulnerable while reciting your poetry?

CM: What inspired you to want everything you deserve and to have the courage to not settle?

Wow. What inspires me… It’s such a hard question. I feel like I want to write a poem about that. I think that for me, it is just making the decision that I don’t want to live buried and I don’t want to live like I’m walking through mud. I want my heart to be open and I want people to feel better when I’m around than when I’m not. I want the people who are in my life to feel more softness in this world because I around. I think there are lots of ways that we all deal with that sometimes and we make the world harder, I just have this real hope of just easing some things.

Other things that inspire me: just watching people create art and watching them loving what they’re doing and watching how somebody creating art is so full of life and so connected and there’s just something—it feels like a huge miracle and that connection when you watch somebody just shining like that—I think that I see people creating great art and I feel like I want to shine and also my experiences just writing. I guess writing is the time I feel most alive in my life I just want to create that.

CM: What do you have to say to those—perhaps college students– who want to use their potential and their words to make a difference like you do?

Okay so it’s over said, I suppose at this point but I don’t give a s**t if it’s over said. Speak from the heart and speak what’s true and never ever feel like your truth shouldn’t be told. There’s always someone who needs to hear it. In terms of art, I think that we have this general idea that you write when you’re in the mood or you write when you get that fire to write and what I found over the years is that if I do that then I’m not going to be creating all that I want to be creating. And be willing to commit to it, like it’s your life duty. Like you wake up in the morning and the last thing you want to do is write, you just do it anyway. You do it like it’s your job that you have to show up to and you do have to show up to it for your spirit and for the world.

Previous Post:The Difference Between Football and Baseball is Literally Night and Day
Next Post:1 is too Many: Speaking Up Against Sex Abuse