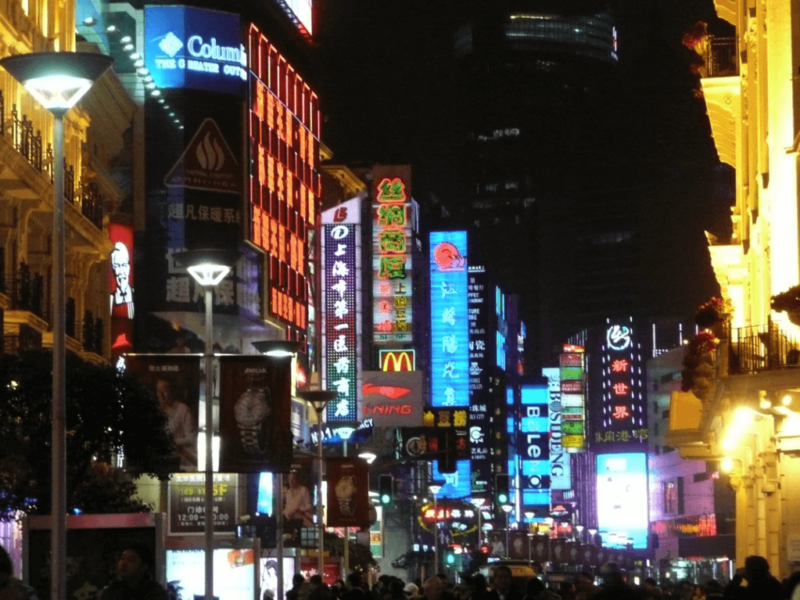 College Mag is in Shanghai!

I’d like to start my Publisher’s blog with a bang—I’m in Shanghai! The University of Maryalnd’s Dingman Center for Entrepreneurship invited me to join a group of fifteen MBA students on their trip to China. We’ll tour Beijing, meet with business leaders, interact with local entrepreneurs and participate in the Dingman Center’s Sixth Annual China Business Plan Competition.

Before the trip begins, Jenn, the Dingman Center’s Event and Marketing Manager, and I spent two days in Shanghai. The city is incredibly modern and exciting!

Jenn was sick the day before and almost delayed her flight, but thankfully she decided she could handle the 15 hours and joined me. Whew, thought I was going to be in Shanghai alone!  We arrived yesterday at 4pm and took a speedy cab ride to The Park Hotel (built in the 1930’s and once the tallest hotel in Shanghai). Jenn wasn’t feeling well so she slept while I went off to explore Nanjing road, known for its shopping and neon signs at night.  Then I found a hole-in-the-wall restaurant (literally) and ate some pretty awful “vegetarian” soup. The woman in charge spoke only Chinese so a random, friendly man helped me order. The place was sort-of run down and I think I heard a cat meow in the kitchen… gotta love China!

Today we explored the Urban Planning museum where they feature an insanely large model layout of buildings for Shanghai, and the Art Museum (a lot of unique installations, and a sculpture of fat men in milk was an entertaining highlight). Then we cabbed over to Xitandi, an area known for a mix of its old and new—upscale shops, restaurants and spas next to cheap markets with ducks hanging to dry and tiny apartments with dingy bikes sitting in the alleys. We walked around and then ate real Shanghai style cuisine at Crystal Jade. I ordered the Shanghainese special dumplings which were out of this world, seriously amazing. And Jenn and I shared some delicious veggie wanton soup. Everything here is extremely cheap; my dinner last night was Y11 ($1.66) and lunch today was Y70 ($10.55). Jenn’s feeling better but is resting up before we head to the Bund for some sights, dinner and the popular Glamour Bar.

The only downsides to Shanghai–freezing weather, strange smells (ie: kitty litter in the hotel), unsanitary water and indoor cigarette smoking.

I’m putting a blog together for the UMD Beijing trip which begins tomorrow afternoon.

Previous Post:Just When You Thought Tuition Couldn’t Get Any Higher…
Next Post:Is Banning Overnight Library Use Necessary?