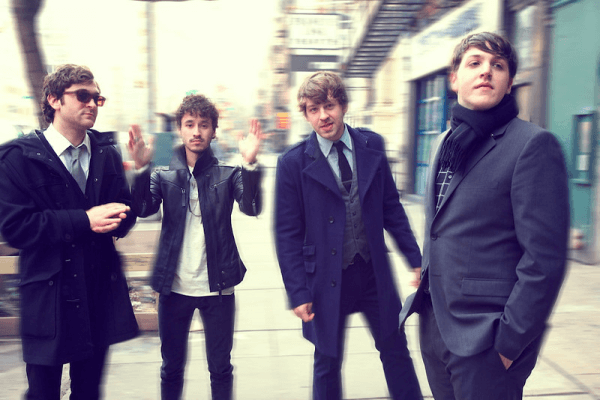 Ross HuberJul 24, 2011
Home » Latest Posts » College Mag Interviews The Postelles
FacebookTweet
New York-based indie band The Postelles have a lot on their plate. They've just released an album, and have a solid lineup of shows to carry them through the summer. Amid all their music-making, though, they found time to sit down with College Magazine to talk about their sound and much more.
Although your time with Capitol Records was short lived, how has the experience differed with +1 Records?
With +1 we have a lot more creative freedom. We can record when we want, how we want and release it right away.  It feels very liberating. Music is an art above all things, and major labels forget that.
For a band who has a reputation for having a "throwback" sound, does this affect the songwriting process? Do you keep a specific genre in mind when writing?
We don't specifically write throwback tunes, although we do believe that pop music was much better in the 50s. We love music from every genre, so whatever ends coming out in the writing is unintentional.
The Postelles have been referred to on a few occasions as a band who does not agree with the MacBook music generation (i.e. synths, backing tracks, etc.). Is this a personal preference for your own band, or a universal belief?
It is a personal preference for where we are right now. We feel the music scene is so over saturated with computer noise that we felt we had a need to play pure rock and roll. That said, bands like The Cure, Radiohead, Blur have experimented electronically and it's beautiful.  I just think it's been abused these days to cover up bad songs.
The Postelles have mentioned to be inspired by many artists from the Motown era, however, do you have any contemporary artist influences?
We love what the Black Keys are doing. MGMT's 2nd record was filled with some amazing tunes. Girls and Deerhunter are doing interesting things as well.
What was it like touring, gigging and gaining attention before even releasing a full-length CD? Were there any creative reasons for waiting until 2011 to release your self-titled album?
We wanted to become the best band possible before recording so it made us real comfortable I'm the studio to have played all these songs live. We added a new song "Sound The Alarms" to the record so that was one creative reasoning. Other then that we had to deal with a lot of hassle from Capitol.

What do you hope fans take from your music and performances?
That they can come to a show and get crazy and dance and make it a highlight of their year.
As a band who is gaining considerable attention/success daily, what advice would you give students and aspiring professionals seeking success in their fields?
Be very patient. These things don't come overnight, even in cases when you thought it did. Make true music and keep it as organic as possible.
Since College Magazine is geared (but not limited) to college students, can you elaborate on the band's academic history?
We went to college for a year and then decided all of our heads were in the band and decided that's what we needed to do at that time. College is a great thing if you know what you're doing there and aren't just going through the motions.
What is your dream non-music related career?
It'd be pretty rad to be a NY Yankee!

Do you have anything else to add?
Our album's out now! Check it out!
FacebookTweet
Life