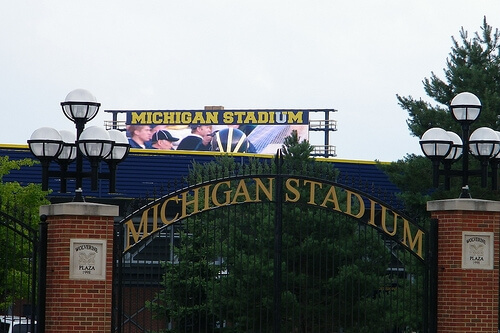 Week two is here and while we’re not quite into the heavy slate of conference matchups yet, we’ve still got some damn fine games lined up for today. Get nestled into the couch, surround yourself with beverages and food because the 12-hour Saturday grind is about to kickoff. Here are the key games for each time slot to keep an eye on. But first, here’s some inspirational speaking from Coastal Carolina’s David Bennett:

Now onto the games of the day.

12:21 p.m. ET- No. 16 Mississippi State at Auburn- Mississippi State has a date with destiny next Thursday night against LSU. Before that duel, Dan Mullen has to have his boys focused to take on the reigning national champions at Jordan-Hare. The Bulldogs lost a nail-biter last year and I’m sure they won’t be short on bringing fire and brimstone for the Tigers. On Friday, Todd McShay went on ESPNU’s College Football Podcast and elaborated on one reason why Auburn is sure to feel the heat:

“There are a lot of teams that just can’t wait to get their shot at Auburn. Because there’s a sense or a feeling that Auburn went out and bought that national championship last year. Right or wrong, ya know, I hear it over and over and over again with the Cam Newton stuff and all the allegations and everything that went on. And Mississippi State was one of the teams kind of in the recruiting battle and everything. So I don’t think any team is going to have mercy on Auburn after watching the team celebrate the wins and Cam Newton and the whole deal. I think that this is going to be a long, long season if you’re an Auburn Tiger fan.”

3:30 p.m. ET- No. 3 Alabama at No. 23 Penn State- The cold and calculated Nick Saban heads north to a place that is the antithesis of who he is—Happy Valley. Strangely enough, both teams have similar problems: Both have a pair of seemingly incompetent quarterbacks. Bama does have a distinct edge with a defense that is not afraid lop off a head or two and snack on the brains on the sidelines while the offense piddles around. Saban’s dark side of the ball boasts eight potential NFLers come April. I’m guessing it’ll be frowns all around for the Nittany Lions.

4:30 p.m. ET- No. 12 South Carolina at Georgia- South Carolina is playing its biggest game in program history. With the traditional powers all trying to rebuild and reaffirm their royalty status in the East, the Gamecocks are looking to storm the SEC castle and claim their first ever conference crown. The battle to the throne starts with a desperate Georgia squad. Playing at home, the Bulldogs must be ready to defend Mark Richt to the bitter end. Kellen Moore and Boise State tediously disassembled Richt’s team last week and in typical knee-jerk reaction, fans are deeming the head coach a jettisoned man if he loses this one. It’s early to declare this a make-or-break game for either team’s season, but I think you could probably declare this a make-or-break game for either team’s season. If the Gamecocks lose, they’re one game behind everyone else in the SEC East with their most talented squad ever. One game down is tough when you’re in the gauntlet that is the SEC. For Georgia, 0-2 could send this team reeling and could eventually send Richt to the gallows.

8:00 p.m. ET- Notre Dame at Michigan- Ah, two teams perennially stuck in the past. The old “Notre Dame is still Notre Dame” logic is still around like a resilient cockroach swimming in a vat of Lou Holtz’s saliva. This leads to the Irish being over hyped every year and after last week’s floundering loss to South Florida, things could be headed that way again. On this particular Saturday, Michigan is really showing its age by hosting its first night game EVER. Wait what? The biggest football stadium in America has never hosted a night game? How could Michigan justify that until this point? Did they do it with some Big Ten is traditional, heartland football poppycock? “When the game first started there were no lights and game was played uphill! That’s what real football is!” Prepare for a culture shock, Ann Arbor because anyone that’s ever been to a home game at night against a big-time rival knows there are fewer things in life that are better.

Previous Post:College Dining Halls are facing the ‘Facts’
Next Post:Join the Club