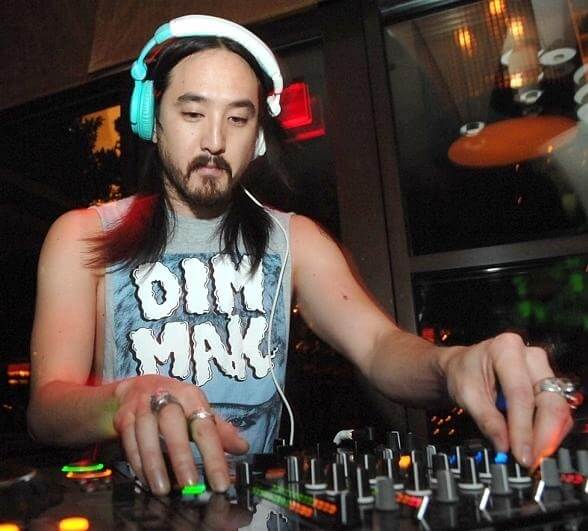 Renee KlahrMar 1, 2012
Home » Latest Posts » CM Interviews Steve Aoki
FacebookTweet
There is a place in the world where champagne and bits of fluffy cake fall from above as masses of people dance to music blaring from the speakers. No, this is not heaven but rather the trademark experience one receives at the hands of electronic dance music DJ, Steve Aoki.
Aoki, who has been a DJ since 2003, exploded onto the EDM scene five years ago and has been dominating with his outlandish shows and high power tracks ever since. He may be best known for his remixes of “Forever” featuring Drake, Kanye West, Lil Wayne and Eminem, and “Pursuit of Happiness” by Kid Cudi, featuring MGMT and Ratatat.

But before the EDM world openly embraced Aoki into its arms, as a regular DJ he seemed firmly on track to mount a career for a very different crowd.
“When I started out, the hipster world accepted me,” Aoki said. “But hipsters are elitist. They burn their own bridges and don’t really want to pay for anything. I never wanted to become a hipster, but it was the only scene I knew.”
All of that changed for Aoki in 2007. When EDM acts like Justice and Daft Punk took the world by storm, Aoki immediately began shifting his interests from solely DJing to a more production-centric career.
“I saw right away that EDM fans will not only pay for music they love, but they are just fans of music,” he said. “And when I heard these new burgeoning sounds, I couldn’t resist getting in on it.”
However, Aoki was an aberration to most in the preliminary stages of EDM in America. “Three or four years ago people would have never understood me doing a collab[oration] with Tiesto,” Aoki said. “They would ask in disbelief, ‘you are doing stuff like Justice but collaborating with the biggest trance DJ in the world?’ And I would say yes, yes I am.”
Aoki never had any interest in pigeonholing himself to one group and, despite the naysayers, he continued on the path towards normalizing the idea of a cross-genre DJ.
“Nowadays it works,” he added. “People accept what I’m doing, and the bridges from the various camps of EDM are coming together. It makes total sense now.”
As one of the most high profile cross genre artists in EDM, Aoki has worked with numerous DJs from all walks of music, ranging from Tiesto to Laidback Luke to Knife Party. He has also worked with artists outside the EDM world like Lil Jon and Will.I.Am.
“I love collaborations because you learn and unlearn a lot when you work with someone who thinks differently than you do,” Aoki said. “For example, I did a track with LMFAO, which was my take on pop music. I want to constantly grow as an artist and you can’t really do that if you are stuck in your own little world.”

Find schools
Aoki’s “little world”, however, is expanding fast. Thanks in part to his club-ready hits and unforgettable shows, he has garnered a massive following.
But the double edge sword to finding such success in the party culture is that it is difficult to look at Aoki as an artist without thinking of substance abuse. What may come as a shock is that Aoki is exclusively straight edge, making his raw energy on stage even more surprising.
“I’ve done the party thing, I survived and came out unscathed, but now I don’t even drink,” Aoki said. “It doesn’t bother me if people choose to do those things on their own time, but I don’t want anyone to get hurt. The most important thing to me is that everyone enjoys my show and gets home safely.”
Aoki, who is currently on tour in promotion of his Deadmeat album, finds other ways to have a good time. Recently, he said, he has been unwinding with his latest and favorite investment on the road: a massage therapist.
Yet even on-demand massages don’t take the place of Aoki’s true passion, which is to produce more music. As a purely creative being, he is most at ease when he is working to create new things for himself as well as his hoards of fans.
“I do what makes me happy, and that has always been music,” Aoki said. “People shouldn’t worry about anyone else when it comes to the things they love. You might not be the biggest DJ in the world, or you might be, but if you believe in your craft you’ll always be happy.”
Photo credit: Nylon Guys Magazine

Previous Post:Copenhagen 2012: That Time When…
Next Post:10 Things The Average Fan Doesn’t Know About College Hoops