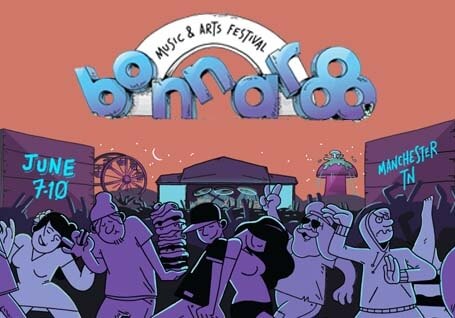 Bonnaroo Bliss: One girl’s Journey to Tennessee and back

Editor's Note: Staff writer Ashley Grohoski spent four days at the Bonnaroo festival in Manchester, Tennessee and is back with quite a few tales to tell. Her festival overview is below, as well as a sneak peek of her exclusive Bonnaroo diary.

Only hours of interstate highway separated travelers from a massive sun-baked field of 80,000 concert-goers. No longer did these dedicated fans need to crank their iTunes volume during “We are Young” or strum along to “Skinny Love” in the hopes of meeting their favorite artists in their dreams because this year, Bonnaroo scooped up a plethora of Grammy award winners to perform on all stages. And hey, piraters, illegal downloading has nothing on sharing music with thousands of just really happy people outdoors.

Bonnaroo’s camping site was divided into sections of RV’s and row after row of tents on the “outskirts” of Centeroo, where all of the music happens. The sense of community was strong in this tent city as every neighbor’s tent is less than two feet away from the next one.

Before entering, each person received a handy booklet including a map and schedule of the acres of music to help access everything easily. The wrist passes were super high-tech as they were used to quickly scan each attendant in one-by one. They contained a small chip that held the purchaser’s provided information to keep everything less crazy and more in order. They were used frequently to access the many sections of Bonnaroo as well as scan different locations and check-in on Facebook!

The festival invested a lot of effort into focusing on sustainability. Throughout the grounds, recycle bins and informational tents were available everywhere. Each recycling center was casually monitored to ensure that less trash sprinkled the field and more of it found its way into the bins.

The most prominent feature of the festival was the people, of course. From vendors, to security, to the people attending, kindness and generosity quickly became an epidemic. The festival required a ton of patience, but thanks to conversational strangers, it wasn’t stressful at all. At times during the day, the sun became a blazing enemy, but the battle wouldn’t last, because someone always picked up the responsibility of cooling the crowd off with their innovative water guns.

Bonnaroo in the day was completely different than the festival’s nightlife. Various light shows scattered the festival, including a decorative lit-up ferris wheel that attendees could see from across the field. Each nighttime performance took full advantage of the darkness by lighting up the fields with mini raves, including glow sticks, glowing hula-hoops, glowing gloves, and flying lanterns.

As pricey as the tickets may seem to those who haven’t attended Bonnaroo yet, the experience is difficult to compare to any other existing festival.  It is impossible to say which concert was the most thrilling, as each show set itself apart from the next, and it is even more of a challenge to forget the truly bizarre people that have made your weekend the one to remember.

Want more Bonnaroo? Enjoy a sneak peek into my Bonnaroo diary and stay tuned for my band interviews, coming soon!

I’ve just finished rolling each v-neck and pair of shorts to strategically pack as many clothing options as possible. By doing this, no one will ever pin me down as the overpacker, even though, after placing my fifth pair of shorts in the suitcase, I have totally accepted the title.

Driving through the night seemed like an excellent idea. We’ll get there just in time to stand in the killer long lines I’ve heard so much about. Somehow, the trip has turned into an extra four hours of traveling, and I keep telling myself that the ten hours of driving is really just nothing to a trucker. Detours and closed exits should be illegal–can we pass that bill?

Fortunately, our group had already attempted a trial run with our tent and canopy building before we left. This way, we can set up camp in minutes and head over to Centeroo without wasting any time at all. Cheers to thinking ahead!

After the bag-check and scanning, everyone slowly leaked into the field and tents. Today is a quiet day, and I’ve only located one band playing thus far. Today is the perfect day to scope out where everything will be located this weekend, aka the port-o-potties and vendors with the best food.

Previous Post:The Infidelity Blindfold
Next Post:How To Catch His Eye