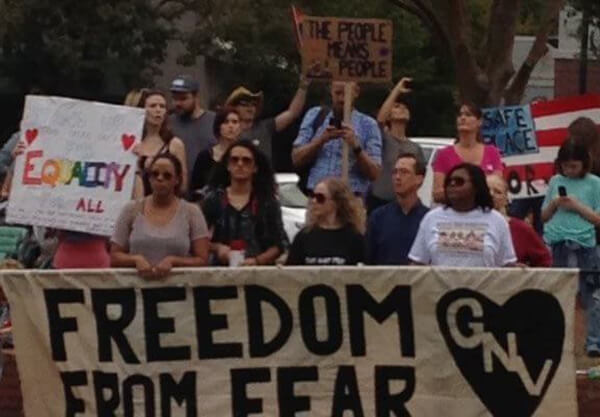 “My Body, My Choice”: Chants Against Trump

On November 19, 2016, the citizens of Gainesville, myself included, said no to fear. In the aftermath of a horrific election cycle, many people have been struggling to cope. In our frustration we keep trying to figure out how to push back against an administration that many fear will have an indelible negative impact on our lives. With my own fears in tow, I decided to march with my fellow townspeople in an attempt to assert myself against the truly despicable ending to a heartbreaking election and the current state of affairs.

Just before 4 p.m. on that Saturday afternoon, I arrived at the O’Connell Center, ready to march down University straight to the town center at Bo Diddley Plaza where a rally would be held after the march. I walked through a sea of Gainesville residents, taking pictures of the many signs people made and talking to a few out of the hundreds who showed up to what promised to be (and remained) a peaceful protest.

As the march began, we walked down the sidewalk, escorted by the police (who had been notified of the march days before) and cheered on by many drivers who passed us. While we walked, chants echoed through the line of people:

“We Reject the President Elect.”

We were heckled by a frat house who stood on the opposite side of the street who yelled at us while blasting The Rolling Stones’ song “You Can’t Always Get What You Want.” We were flipped off by several onlookers from side of the road. We were followed by people carrying Trump/Pence flags. They seemed to think we were simply sore losers. While I can’t speak for everyone in that march that day, that couldn’t be further from my reason for protesting.

As I marched with my new friends chanting “My Body, My Choice” at the top of my lungs, I felt liberated. Despite the outcome of this election and the near crippling realization that my vote did not matter as much as I thought, I felt heard. We stopped to high five and thank the police officers who stationed themselves at checkpoints throughout the route. This was what democracy should look like—the freedom to protest, to demonstrate—freedom from fear.

When we reached the town center, we filled in and as I looked around at the crowd of people, holding signs and chanting, I felt safe. Watching hundreds of people take time out of their day to come and march for a cause they believed in was beautiful. I stood and listened as people went up to a megaphone, alternating between speaking on their experience, singing and sharing words of wisdom for us all.

Few days in my life have left me feeling as inspired or alive as I felt that day. As I looked out at the hundreds upon hundreds of Gainesville residents who came out to reject hate, reject fear and begin to build bridges, I felt hopeful. The main speaker Paul Ortiz said to us all, “We are the leaders that we have been looking for.” It was mesmerizing to hear the cheers in response.

A woman who had been standing next to me handed me the signs she made as she was leaving. I looked at the poster boards emblazoned with the words, “We need a uniter, not a divider,” and “Not Welcomed: Racism, Sexism, Fascism.” I handed one to a friend and held the other with pride as I watched the event wind down with the sun.

I still fear for our country, but maybe that’s a good thing. For better or worse I am awake now—alerted to the issues that will likely plague us all for years to come. While I do fear for my own fate and that of my friends, one image brought me hope. In the center of our circle in the town square stood the children of protesters who saw fit that day to show their kids that it is important to stand up for what you believe in—that you have a voice that matters. In spite of all that has happened, I am heartened at the fierce love I witnessed that day. The coming years may be dark ones, but we are not hopeless yet.

Previous Post:24 Best Things to Do in NYC in 24 Hours
Next Post:Sign Up for College Magazine’s Online Writing Course Today!