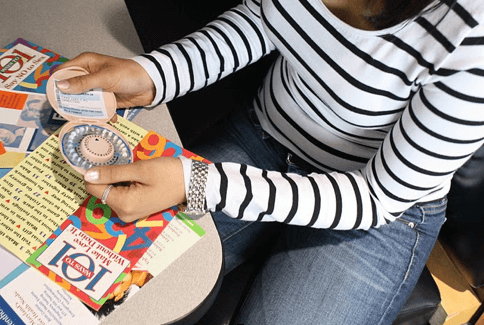 College MagazineFeb 23, 2011
Home » Latest Posts » Birth Control Methods for Busy Girls
FacebookTweet
There’s no reason your busy college schedule should stop you from choosing the right birth control method. It is important, said Peggy Planeczky, associate professor of Clinical Obstetrics and Gynecology at Cornell University, that choosing birth control adheres to one’s own health concerns and sexual intimacy. Including “cost, availability, partner cooperation (or not), need for STD protection, and underlying health or menstrual issues” that help aid in the decision to work with a more efficient method. Here are some of our experts’suggestions:

Katie Guiragozian, a student at California State University at Los Angeles believes that birth control should be a habit formed by one’s own personal comfort. “Personally, I forget. I looked at the depo shot, however, I didn’t like the shot once every three months because it was way too many hormones at once.” The “depo shot” Guiragozian refers to is a 3-month-long progesterone shot. Usually given in the hip or arm, it thickens the uterus lining of your body with cervical mucus, preventing sperm to survive or enter your body. Though Guiragozian does not find it preeminent, the Depo Provera shot is easily accessible by university health centers and is effortless in its method.

A study by Princeton University revealed that the copper-T IUD and the contraceptive implant were some of the cheapest methods on the string of economically efficient birth control. The cost of up-front contraceptives may come with a heavier price tag once weighed in from the individual value. A copper-T IUD is an intrauterine device inserted by your doctor that contains a t-shaped wire that can last up to 10 years in your uterus. The contraceptive implant is a ½ inch long capsule inserted into your arm that releases progestin in your body. Similar to the Depo Provera Shot, the implant creates mucus around your uterus lining. Surgical methods can last from a year to over a decade – almost effortless, and befitting into a hectic student schedule.

It sounds simple, but… Condoms

“Keeping a condom with you at all times is not a bad idea,” Planeczky advised. “Some couples who have sex frequently still want to use a condom or diaphragm because perhaps the woman does not want to take a pill or hormones, or had side effects from hormonal contraception.” Condoms are easily attainable at any drug store and through your campus resources (check to see if your health center gives out free ones!) Condoms are ideal for couples who do not rely on the female for birth control responsibility. It is a quick and easy method with lots of variety, including choices in lubrication, flavor, and material.
Planeczky claimed that there is no answer to easier, safer methods, but there are easily- accessible – even while living on campus – and efficient means for preventive birth control. "Just because your roommate likes it, does not mean it is the right birth control for you. And just because your best friend hates it or had a side effect from a contraceptive, does not mean you will have the same problems,” she said. Make sure you’re getting what’s right for your body, your sex life, and your comfort.
FacebookTweet
Life