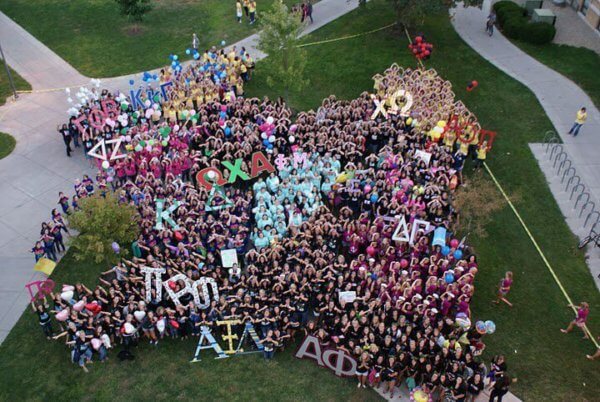 All summer leading up to my freshman year of college, my Greek life friends told me time and time again that I had to rush a sorority. Since I wasn’t living on campus, and not a lot of my friends were attending the same college, I thought they might be right. I had continuously heard nothing but good things about Greek life. I couldn’t see any downside to joining. Believing that the only way I was going to make friends was by joining a sorority was completely wrong. However, I didn’t realize this until after I actually joined.

The first day of rush was full of tons of beautiful smiling faces pulling me in every direction wanting to know every detail about me. I have to admit, this is what really got me. You suddenly become the most important person in the room. Everyone is genuinely interested in knowing everything about you, and that’s a pretty great feeling.

You can probably guess how the story goes. I rushed, fell in love with the whole sorority thing, accepted a bid to join. Don’t get me wrong; everything was great for the first little while. I mean, who doesn’t love theme parties, formals, date nights and of course philanthropies? At the beginning, I loved that there was something different every night of the week. That was until I remembered I didn’t live or work on campus and the commute was 40 minutes each way. After realizing this, I thought I would just cut back to doing things a couple times a week instead of seven. Nope, I started getting fined for events I would miss. This is when I really started losing interest in the whole sorority thing. I was paying a good chunk of change to be a part of a club, and on top of that I was getting fined for missing events I was paying for in my dues. Yeah, no thanks.

The following semester, I finally realized I no longer wanted to be a part of Greek life. I enjoyed a lot of various things my sorority had to offer, but I also hated a lot of the important aspects and traditions about it. I was never the die-hard sorority girl to swear by everything that sisterhood within a sorority is true. I didn’t even think that really mattered until rush came around and I was the only one not feeling it.

If you aren’t a part of a sorority, let me fill you in on the amount of time and effort that goes into creating rush week for all potential new members, or PNMs. First you start with a two week preparation process which consists of picking out a theme for each day of rush, picking out colors, picking out matching outfits and creating a plan to draw in as many girls as possible. Then comes practice. Yes, I said practice. All currents members within the sorority will then practice with each other on how to talk to PNMs and encourage them to pick their house.

After rush ended, I immediately dropped out of my sorority. I knew from the first day of the preparation process the sorority life wasn’t for me. I’m not saying what they do is wrong. I just knew it wasn’t for me. I knew I wasn’t as excited about the traditions, the sisterhood and the bonding as all the other girls were and that felt wrong. It felt wrong to not be passionate about an organization I was representing, and it felt wrong to change who I was in order to be more passionate.

I’m not here to bash on Greek life. I still have many friends in sororities and fraternities who absolutely love it, and that’s great. Not to mention, if I hadn’t joined a sorority I wouldn’t have met my fiancé. So do I regret joining a sorority? No. Do I regret dropping? No. I’m just here to say it isn’t for everyone, and that’s okay. If you want to meet people on campus, there are several events and clubs that your college hosts in order to do so. At my school, the University of Utah, about three percent students take part in Greek life. This means that Greek life isn’t your only option to making friends…otherwise, we’d have 30,000 friendless zombies walking around. Look into all of your options and decide which one fits who you want to be in college.